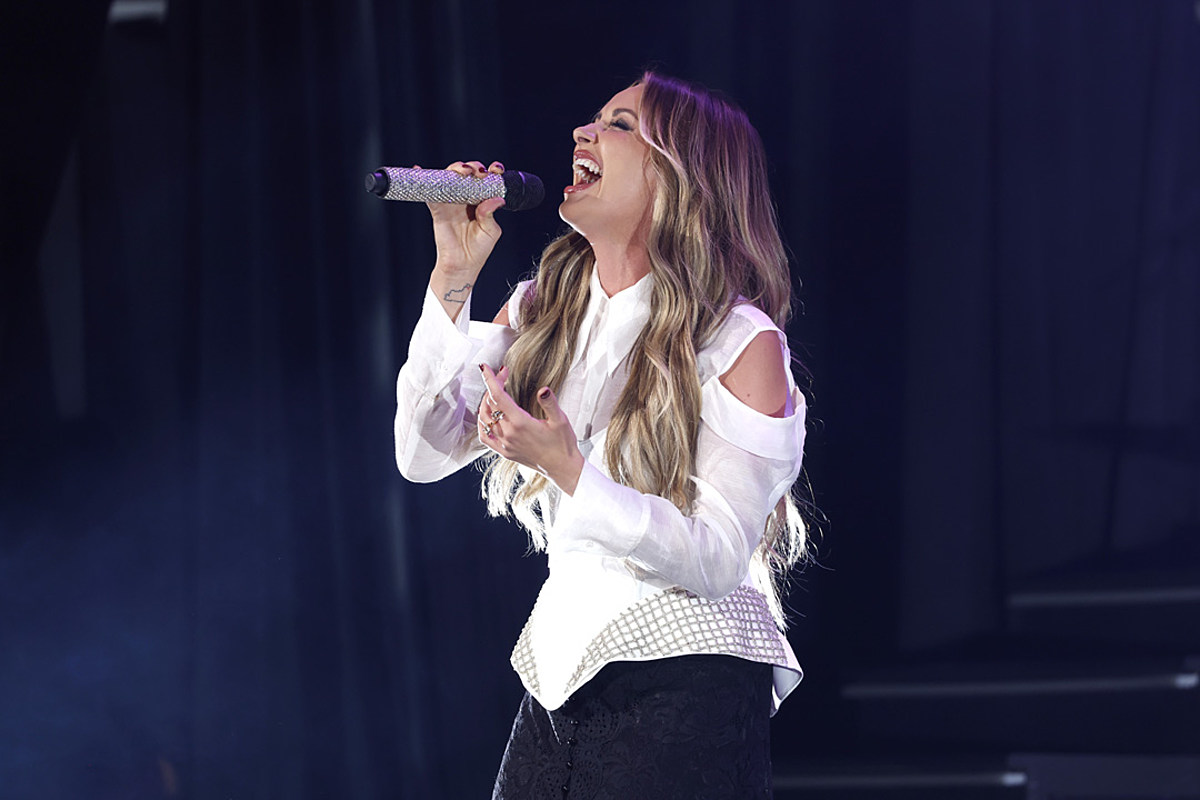 Give Carly Pearce credit: During the first of two nights at Nashville’s Ryman Auditorium, the “What He Didn’t Do” singer didn’t load up on contemporary A-listers in an effort to juice votes for the upcoming CMA Awards. Instead, Pearce stuck to her roots.

A humble Bill Anderson, a so-proud Ricky Skaggs and a mic-dropping (figuratively) Gary LeVox were the special guests during Pearce’s 18-song set on Wednesday night (Oct. 26). The show was an emotional journey through the ups and downs that got her here. The singer’s strength as a storyteller stood out during songs, and in between.

“Hi, Mom and Dad. I guess I made it,” the 32-year-old squeaked after “You Kissed Me First.” Her ear-to-ear grin is the kind that makes the whole room smile, stand up and shout. Friends, family and Pearce’s record label and management team were in the audience for the show.

Pearce is a comfortable entertainer who has found her voice dishing on love and heartbreak. Songs like “Next Girl,” “I Hope You’re Happy Now” (performed with opening act Jackson Dean to close the show) and “Never Wanted to Be That Girl” dive into not just her 2020 divorce, but relationship missteps that preceded it. The most alarming lyrics never divulge so much as to make it difficult for fans like her to associate with the story. Only once did you wonder if she’d get through the song.

Well, twice — “Show Me Around” (her tribute to producer Busbee) found her choking back tears, but “29” was something of a wrestling match between singer and song. It’s an all-encompassing lyric about her awful 29th year, and even though she set it up by assuring fans that 32 is awesome, you could see her searching for the patience the ballad requires against the impulse to just get through it. As real as Pearce is on stage, this was her most vulnerable moment.

The audience for show No. 1 of this two-night run in Nashville was heavily female, but not exclusively young female. A scan around the sold-out balcony found older women and men singing along to hits like “Every Little Thing,” her first No. 1. Of the guest stars, LeVox’s appearance on “What Hurts the Most” (his hit with Rascal Flatts) worked best. The young crowd might have had to Google Anderson or Skaggs, but when Pearce and LeVox turned up at opposite ends of the stage to begin the encore, every single person in the audience jumped up.

With five nominations at the upcoming CMA Awards and voting set to close on Friday, this night in Nashville could have strived to remind voters how the reigning CMA and ACM Female Vocalist of the Year has elevated her profile in 2022. It has to be tempting to call on out-of-genre stars during moments like these, because they drive headlines. Instead Pearce doubled down on her commitment to traditional country music and her own personal story in ways no one saw coming.

Anderson didn’t take the stage to sing a Carly Pearce song or even one of his well-known songwriting hits. Instead, Pearce played the role of Dolly Parton to complete his song “Someday It’ll All Make Sense.”

Skaggs didn’t join his fellow Kentuckian and Grand Ole Opry member for anything modern, either. Pearce explained how, growing up, she won a talent contest by singing “Blue Moon of Kentucky,” a 75-year-old Bill Monroe song, and then invited Skaggs to the stage. If there was a lesson to take away from the evening, it was when it doubt, be sincere.

Is Politics Infiltrating Country Music’s History of Charity Work?
Watch Pink’s Stunning Tribute to Olivia Newton-John at 2022 AMAs
Morgan Wallen Releases Beautiful And Heartfelt New Music Video With His Mama For Current Single, “Thought You Should Know”
Sam Hunt Gets Back to His Roots on New Song, ‘Start Nowhere’
‘The Voice’ Reveals Top 10 for Season 22