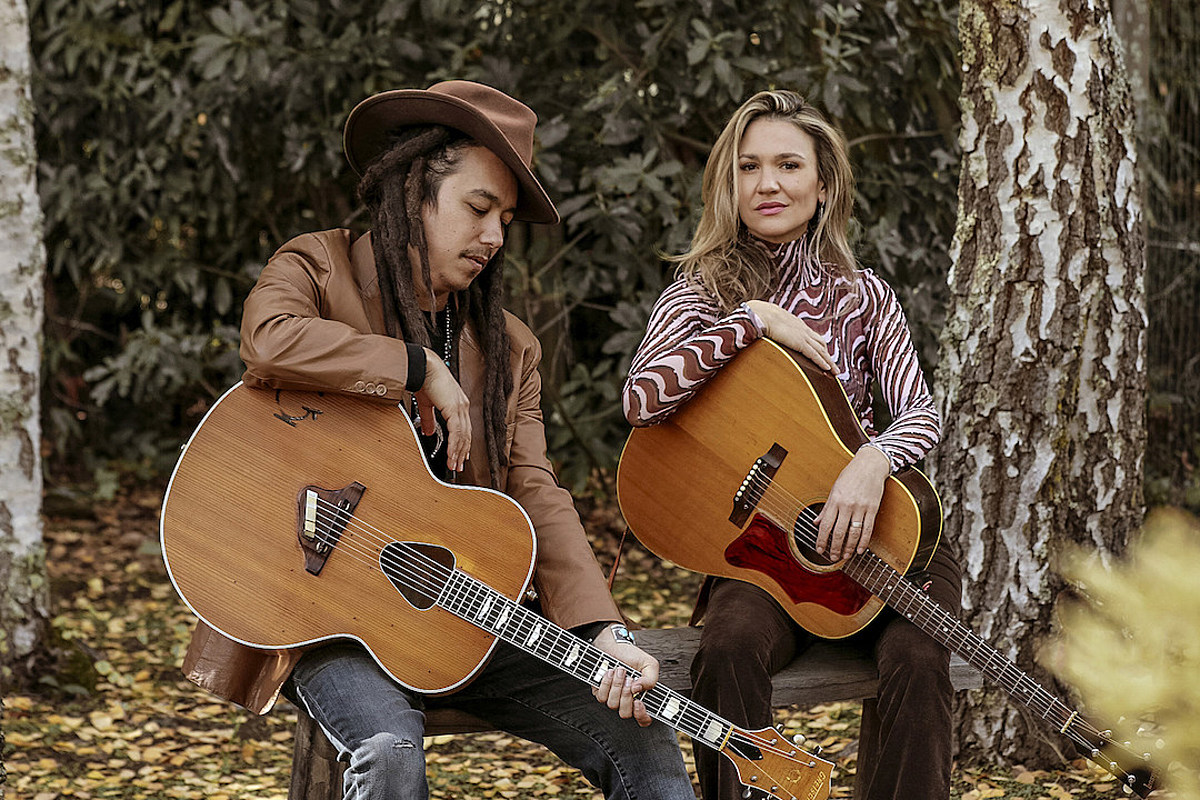 San Francisco Bay area duo Effie Zilch conjure up Stevie Wonder and Dr. John vibes on their latest single “Ship Has Sailed,” which is premiering exclusively at The Boot today (Aug. 4). The deceptively upbeat soundscape accompanies a serious message about our collective action, or lack thereof, to combat climate change — and the dwindling time we have left to save our planet.

According to vocalist Evanne Barcenas, the song first came to her nearly two years ago during a bout of torrential wildfires around California’s Bay area that filled the sky with so much ash that it blocked out the sun.

“For a couple of days the sun was like an oppressive, red orb in the day that made every day feel more like dusk,” Barcenas tells The Boot. “The air quality was so bad that we couldn’t go outside so we stayed in and listened to a bunch of feel-good records to lift our spirits. When I sat down afterward to reflect on everything was when the song came to me. I remember driving out to Pescadero, a small coastal town that’s a huge place of inspiration for us, after the smoke cleared. It was there watching the waves roll in that I imagined a ship and eventually the song’s title, ‘Ship Has Sailed.’”

Listen to the track below, which the band is using to raise funds for The Ocean Cleanup, a non-profit looking to rid the world’s oceans of plastic.

“Ship Has Sailed” is the third single from the band’s forthcoming album Trinity Vol. II out Sept. 9 via Red Tone Records, following “Room For Us All” ft. Miko Marks and “Cut Through.” The project is the successor to February’s Trinity Vol. I and builds further on the chemistry that Barcenas and Wyreman have built since their respective life journeys brought them full circle and back to one another.

“I had taken a little hiatus from the pen and guitar for a while, but eventually had too many songs bubbling up to the surface and a really good friend in Steve who knocked on my door to come bring me back,” says Barcenas.

Friends and bandmates since high school, the two split after graduation. Barcenas went to college and Wyreman spent time between New York City, Los Angeles and other places producing and doing session work for the likes of Leon Bridges, John Legend and Richard Ashcroft (The Verve). However, after 12 years of working on other’s projects, he needed a change.

“It was a gratifying experience, but I never got to see anything through until the end,” says Wyreman. “It’s nice to be back working with Evanne again because together we are able to see things through.”

“Neither of us are trying to be something we’re not, which allows us to have a real freedom with each other that radiates throughout every aspect of our music,” added Barcenas.

Although he still does production work — including on Trinity Vol. I and II and label/band-mate Miko Marks forthcoming album — Wyreman’s main focus is now on his work with Effie Zilch. His effort on the dials shines through on the new album, which navigates from gospel choirs to 70’s funk, soul and rock’n roll.

One of Trinity Vol. II’s brightest examples of this is on the aforementioned “Room For Us All,” an emphatic anthem of empathy and openness that oozes with similarities to Joe Cocker’s Mad Dogs & Englishmen. According to Barcenas, the song is about there being enough room at the top for everyone to be successful.

“There shouldn’t be a scarcity mindset, but oftentimes with women you’re conditioned to think that my success is dependent upon your failure,” says Barcenas. “When we first recorded [‘Room For Us All’] it was just me singing. Then we brought Miko in and it took the song to another level. Her inclusion also exemplifies the song’s message because we’re two different but powerful vocalists coming together to build a bigger sound.”

The resounding message of empathy and openness in “Room For Us All” quickly gives way to encouragement and other positive reinforcement on “Cut Through,” more of a soulful ballad that sees Barcenas break down as she sings about all the hurdles that life throws your way in pursuit of chasing your dreams.

“I wrote it to encourage myself and to quell the voices in my head filling me with doubt,” says Barcenas. “I want people to know that anything can happen at any time in your life, so it’s never too late to give up on your dreams. You just have to set those intentions and go for it. The only thing that is going to stop you is yourself.”

Despite most of its rock’n stance, the album eventually takes a folksy turn on closer “Rhododendron,” a story of a ten second encounter Barcenas has with a man in Hot Springs, N.C. that she turned into a full-fledged song.

“I remember walking down the Appalachian Trail with a fishing pole and running into a man sitting on a rock,” says Barcenas. “He introduced himself as Jerry and said his wife had recently died. He lived on the other side of the mountain and was trying to do things that they’d always wanted to do but hadn’t gotten the chance. That really touched me and inspired the song. I think it speaks to those moments in songwriting when you’re searching for a story to write about before being hit with the realization that stories are everywhere, it’s just a matter of you noticing it. It’s a man sitting on a street corner or a lady at the grocery store. In this case it’s for a sweet man named Jerry that I’ll probably never meet again. Or maybe we will. Who knows?”

You can learn more about Effie Zilch’s music and upcoming tour dates by visiting the band’s official website.