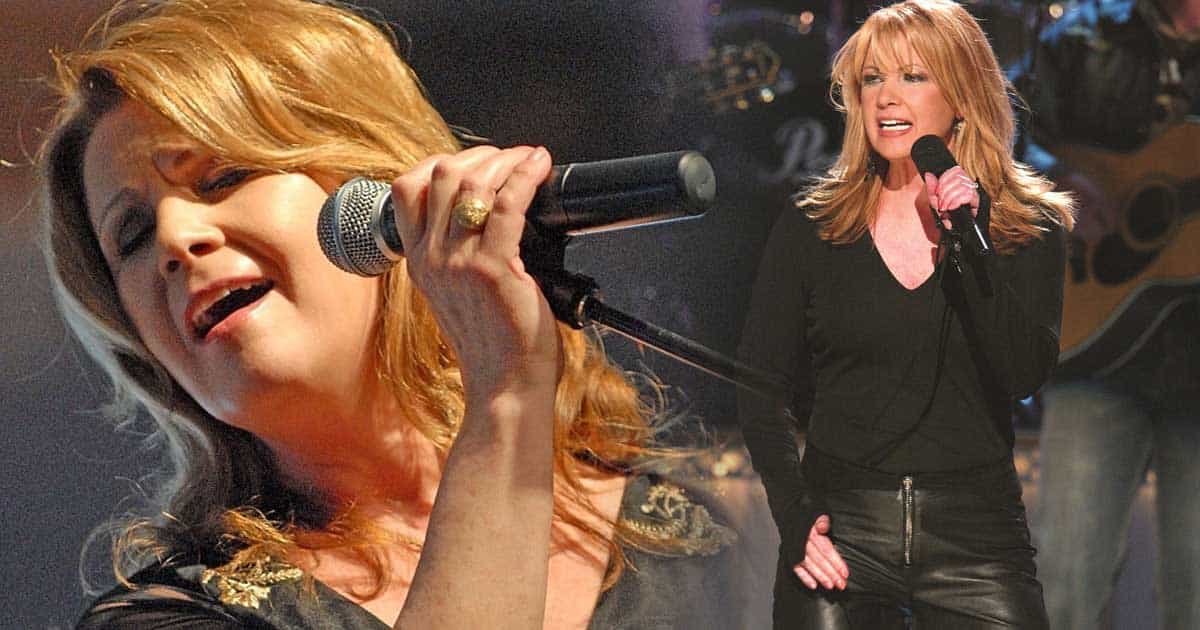 Being one of the most popular voices in her generation, Patty Loveless captured pure country music fans’ hearts. Her mix of honky tonk and country rock, along with emotional ballad style, earned her comparisons to country greats such as Loretta Lynn and Reba McEntire. It’s a little surprising how Patty Loveless songs featuring poignant lyrics and contemporary twang instantly dominated the country charts during her reign.

Let’s take a look at some of her most appealing and emotionally compelling tracks throughout the years. Keep on scrolling below.

1. I Try to Think About Elvis

This is one of Patty Loveless‘ most distinctive songs that endures to this day. “I Try To Think About Elvis” finds Loveless using all the distractions possible – from Elvis Presley to high heels and good deals to the Creature from the Black Lagoon – just to move on from an old flame. It comes with an equally iconic music video that is so thoroughly 1990s.

2. Blame It on Your Heart

Loveless finds herself singing about a “lying, cheating, cold, dead beatin’, two timin’, double dealin’, mean, mistreatin’” ex-boyfriend. While all she ever wanted was to be his one and only, that dream was laid to rest as he ever did to her was to make her lonely. She knows for sure someday, he’s going to reap what he sowed.

3. Nothin’ but the Wheel

Here’s another heartbreaker from Loveless, which sings about her journey of driving down the highway in the wee hours after she has ended her relationship with her lover. She’s leaving everything behind, and she’s holding on to nothing but the wheel – after all, he no longer wants her anymore.

4. How Can I Help You Say Goodbye

Loveless met different losses in her life in this poignant ballad, and these are moving away from her best friend as a little girl and breaking up with her husband as an adult. And every time she did, her mother would comfort her, asking, “how can I help you to say goodbye?” Sadly, the song ended with her mother breathing one’s last breath.

The song earned various nominations, including from the Grammy Awards in the categories of Best Female Country Vocal Performance and Best Country Song.

5. If My Heart Had Windows

The song was originally recorded by George Jones in 1967. Two decades later, Loveless released her rendition – which reached No. 10 on Billboard’s Hot Country Songs chart, making it her first Top Ten country hit of her career.

She also sang this song on the night she was inducted into the Grand Ole Opry.

When Loveless and her brother, Roger Ramey, heard the tune, they knew it would be a great song for her to record. Her voice, which is rich and resonant, is just the perfect fit for the ballad.

Here’s another song written by Nashville Songwriters Hall of Famer Kostas, who composed many other songs that Loveless had recorded. However, when Loveless’ producer at the time heard the song, he was absolutely doubtful it would fit the country singer’s repertoire since it contains questionable lyrics.

So, Kostas reconstructed the song to make it appropriately suitable for Loveless.

The first time Loveless listened to this song, it immediately hit her – from its melody to its lyrics about a woman hurt by the end of her relationship. But her lucky stars aligned, and she found a man who genuinely loves her. The river of tears that used to flow from her eyes only helped her end up in this paradise.

Written by Kostas, the song’s light and playful melody would surely remind you of the sparkly fresh quality of new love. It quickly captured the heart of country fans that it became the first No. 1 hit for Loveless and was also Kostas’ first taste of success.

Loveless’ song about divorce brings us two sides of a story that seems so familiar. Written by country singer-songwriter Gretchen Peters, the poignant ballad describes a marriage’s end where both the husband and wife realize they have become complete strangers through time.

Truly, Patty Loveless delivered a breath of fresh air to traditional country music. You can check out some more of her hits in the video below.

So, which do you think are the greatest Patty Loveless songs?

The Statler Brothers Remind Us that “The King is Coming” Soon

That Time When Shania and Billy Hosted A “Party For Two”

Loveless Empowers Women in “I’m That Kind of Girl”

Loveless Empowers Women in “I’m That Kind of Girl”

Kacey Musgraves on LGBTQ+ Support: “We have to tell everyone’s story.”

Kacey Musgraves on LGBTQ+ Support: “We have to tell everyone’s story.”

Here Are Some Facts About Webb Pierce, One Of The Most Distinctive Country Music Stylists

Here Are Some Facts About Webb Pierce, One Of The Most Distinctive Country Music Stylists