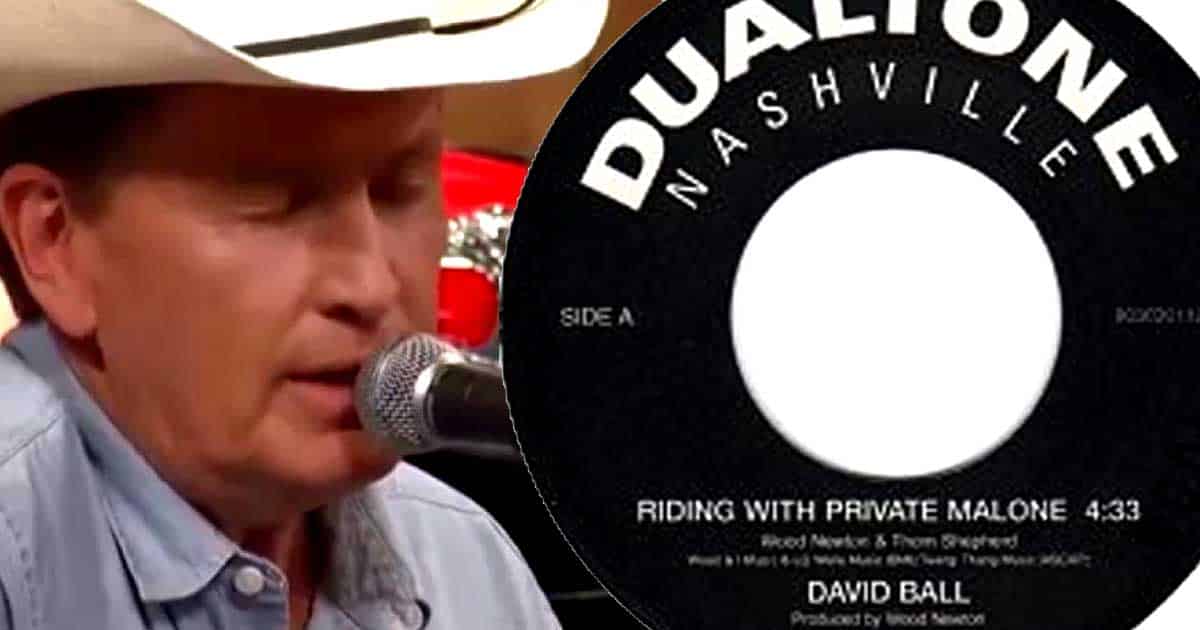 Usually, when a story involves ghosts or spirits, the mood becomes scary. But David Ball turned it into a classic hit that would overthrow the eerie effect of the story. “Riding with Private Malone” narrates a man who finds treasure of a lifetime in an old car that belongs to a Vietnam War Soldier who did not make it home to see his family.

So the story goes. A man bought a “Chevy,” which turns out to be a Corvette. He, later on, found a note placed somewhere in the car, it was from Private Andrew Malone. It said that if someone read the note, it would mean that he wasn’t able to make it home. But, whoever may drive the car, the private will always be with him.

And the new owner of the Corvette felt the presence of Private Malone every time he drove the car. He even saw the ghostly vision of a soldier riding shotgun at times. Until one day, he got into a bad wreck. With the heavy impact of the car crash, he wasn’t sure how he survived. Later on, a witness of the accident told him that a soldier pulled him out from the car. He knew then that it was Private Andrew Malone.

Songwriters Wood Newton and Thom Shepherd are the creative minds behind this classic hit.

The song was inspired by different real-life accounts. There was the story of a man who restored a 1966 Corvette and put up a website about it. Another man restored a car and his radio kept on playing the same station even if he would tune to other channels. Newton had his fair share of story. He had a lieutenant cousin who just came back home from the Vietnam War. His father got him a Corvette for a present when he went home. Unfortunately, he got killed in that Corvette the night he was supposed to go back to duty.

So Newton and Shepherd blended together to put all these stories in a song. Shepherd had the name Malone because it rhymed with home. And, they specifically chose the 1966 Corvette as the car model in their song because it represents classicality and an amazing icon of ingenuity. The four-minute song needed four hours to be completed.

Above all the stories within the song, it leaves us with a message of hope, continuity, and a sense that the memory of those who didn’t make it home will always be riding with us, and with the future generation.

Tribute to the Veterans

“Riding with Private Malone” was a hit from David Ball and it was released in 2001. This hit peaked at number two in Billboard Hot Country Charts. When the song was released, it received a lot of positive comments from its audience and critics alike. Plus, a lot of country stars also released their version of the song.

Go ahead and listen to this wonderful hit as a simple way of paying tribute to the Vietnam War veterans.

A Song of An Apocalypse: “Bad Moon Rising” by CCR

A Song of An Apocalypse: “Bad Moon Rising” by CCR

A Touching Ballad of James Otto, “When Angels Hang Around”

A Touching Ballad of James Otto, “When Angels Hang Around”

Listen To Toby Keith’s “As Good As I Once Was,” A Remorseful Anthem For Anyone Who’s Getting Older

Listen To Toby Keith’s “As Good As I Once Was,” A Remorseful Anthem For Anyone Who’s Getting Older

Here Are The Best Jim Reeves Songs To Warm Your Heart

Here Are The Best Jim Reeves Songs To Warm Your Heart

Alan Jackson, George Strait Team Up for a Legendary Performance