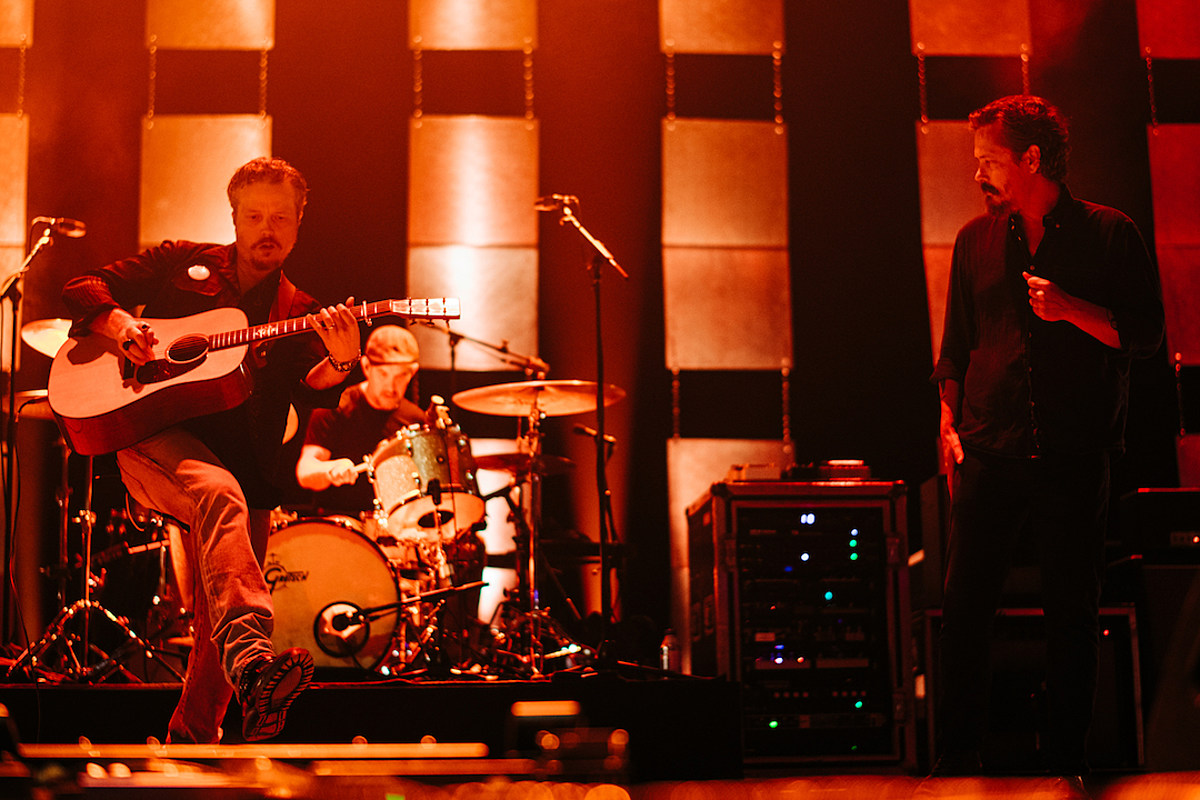 Huntsville, Ala. has never been traditionally labeled as “cool.” It’s been home to some of the nation’s brightest minds; actual rocket scientists, some of which were Alabama born and raised, but many of which were transplants. It’s a city that has struggled to find an identity beyond its NASA Space Center. Now, city leaders are looking to change that.

For four years, Orion Amphitheater has been a vision for Ryan Murphy, President of Huntsville Venue Group, and Ben Lovett, CEO of TVG Hospitality (you may know the latter as the pianist for Mumford & Sons; his band mates were in attendance as spectators).

The pandemic unexpectedly prolonged the project, but the world-class venue welcomed its first real audiences in earnest last weekend with “The First Waltz,” a series of weekend concerts that leaned on the musical heritage of the entire state. Jason Isbell & the 400 Unit, representing Muscle Shoals, headlined the first night on Friday (May 13) while Athens’ native Brittany Howard of Alabama Shakes closed out the May 14 set. The Friday and Saturday shows also featured performance by Birmingham natives Emmylou Harris, St. Paul & the Broken Bones, John Paul White and Waxahatchee, as well as Isbell’s former band and fellow Muscle Shoals natives Drive-By Truckers. Mavis Staples was the only artist on the bill without Alabama roots from birth, but she’s become adopted family over the years as the original bassist on The Staple Singers hit “I’ll Take You There,” David Hood of the Swampers, has often performed with her. This performance continued that tradition.

Named The First Waltz as a nod to Martin Scorsese’s concert film of The Band’s final concert, The Last Waltz, the weekend’s collection of artists also shared a special connection with the film — Harris and Staples were part of both events.

The weather was flawless, parking was a breeze and concession stands were efficient. Organizers couldn’t have hoped for a better weekend as they hope to unlock the potential of Huntsville’s geography in becoming a music destination.

The Muscle Shoals area has always shied away from connecting itself to Huntsville. But over the weekend, artists found new ways to refer to “home.” Isbell, who traditionally opens shows across the world by announcing, “Hi, I’m Jason Isbell and this is the 400 Unit. We’re from Muscle Shoals, Alabama for the most part.” He typically alters that at his home festival, Shoals Fest, held each October. “We’re from right here!” he says when performing along the Tennessee River that separates Florence and Muscle Shoals. At The Orion in Huntsville, that became, “We’re from here in North Alabama!” — a declaration that exuded the things that Huntsville hopes come from the endeavor.

Huntsville’s population has always been much larger than the Muscle Shoals area, and its blue laws have always been more progressive. As such, hard touring acts like Isbell and Drive-By Truckers have a long history of playing every single venue that has ever opened doors in the so-called “Space City.” Both Isbell and Truckers founder Patterson Hood spent their respective sets sharing a myriad of anecdotes about growing up in many of those dives. They also detailed their ascents to the 8,000 seat venue that sits on the same property that Madison Square Mall stood during their youth.

Isbell joked of “playing every venue in this town.” For several years, he’d perform a “homecoming” show of sorts at Crossroads Cafe around Christmas. It was at one of these shows that his current guitarist, Sadler Vaden, made his band debut (Vaden replaced Browan Lollar, now the guitarist for St. Paul & the Broken Bones). He recalled playing at spaces like Humphrey’s, the mall that was razed to accommodate Orion (that one was at a Coconuts), an old adult movie theater and at Mr. C’s Lounge which “paid in draft beer.”

“I used to come to the mall here,” Hood also quipped of his own Huntsville memories. “Pizitz (department store) was right over there! I’m thankful I didn’t get caught doing the things I did in Pizitz in 1984.”

Perhaps Hood most succinctly described the weekend by altering the lyrics to his own “Let There Be Rock,” a track about having tickets to a Lynyrd Skynyrd show in Huntsville, but never seeing the band because the plane crash happened before the tour.

“I never saw Lynyrd Skynyrd, and I never saw The Clash. But I saw Kansas about 20 times at the VBCC (Von Braun Civic Center) mother [expletive]!”

For decades, major tours have skipped Huntsville for Birmingham and Nashville, both of which are about 90 minutes away. But the stately Orion, with its exterior reminiscent of the Greek Theater in Los Angeles and walls built high to keep the sound inside, housed in an entertainment district now called “Mid City,” can change that. It can successfully stand as a destination venue for people from those nearby markets. Huntsville’s infrastructure has never been great, either, but it does have a great interstate, and developers were sure to shoehorn an off ramp directly into the venue’s south lot to ensure convenience.

Orion has a busy summer ahead, with a roster that includes performances from Dave Matthews Band, Jack White, Chris Stapleton, Kenny Chesney and more — all of which are the types of acts that would have typically skipped the North Alabama city. When Widespread Panic performs for three nights over Memorial Day weekend, it will certainly become even more clear how the brand new venue’s future will fare.

Jason Isbell And The 400 Unit, Emmylou Harris and Waxahatchee were a few of the country and Americana artists who took the stage during the opening weekend festivities at The Orion Amphitheater in Huntsville, Ala. on May 13-15, 2022.