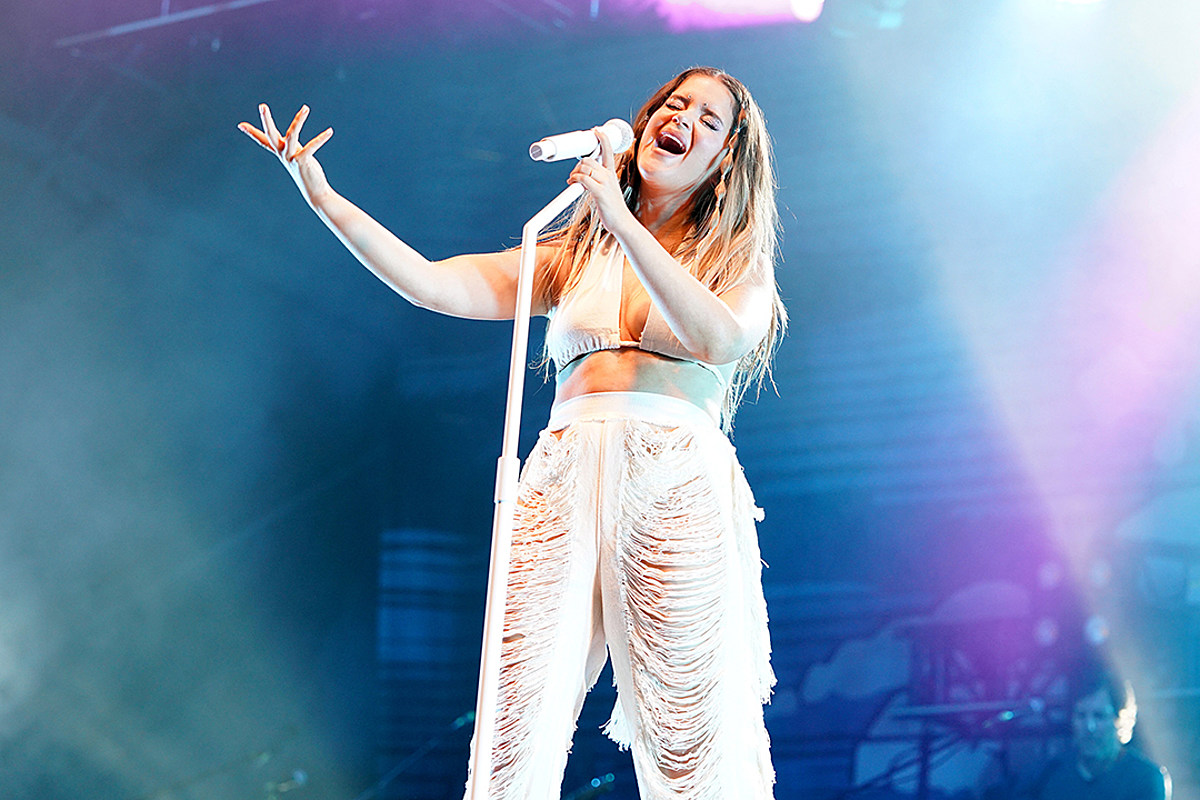 Maren Morris has set the stage for the next phase of her career.

During Sony Music Nashville’s annual Girls Night Out event in Nashville, the Grammy winner offered a preview of her new album, Humble Quest, for an intimate crowd of members of the Nashville media. Perched on a stool with a cozy fire blazing behind her, Morris played a handful of deep cuts directly from her phone that prove the expansiveness of sounds on Humble Quest.

“I want a headset mic like Garth,” she joked after experiencing some technical difficulties with the microphone, instead opting to project her voice into the crowd as she shared the story behind each song. First up was “I Cant’ Love You Anymore,” a play-on-words bop that she co-wrote with husband Ryan Hurd in Hawaii in early 2021. The singer says they were attempting to channel the late John Prine with the “quirky” nature of a song that blends country twang with a cool dash of hip-hop, while the lyrics reference Hurd’s Midwestern upbringing. She calls him “the angel to my devil” within — ”No one understands my kind of crazy but you, and I love you anyway,” Morris describes of the song’s meaning.

She followed up the playful tune with a shift in tone, to the Natalie Hemby co-penned “Nervous,” a smoldering, edgy song that finds her singing sultry lyrics like, “chasing my body like you’re learning cursive” over an angsty melody, led by electric guitar, which gives it a rock edge. She shows off her clever songwriting abilities on “Tall Guys,” an ode to the comedic height difference between Morris — who measures at 5’1 — and her 6’3 husband.

“Most people are taller than me that walk this planet,” she quipped. “I wanted to write a song about even though I appreciate all types, there’s something about a tall guy.” This lead into a turn-of-phrase track in which she asserts that she drinks from the top shelf because he can reach it, and they fly high class where he’s a natural fit.

“I feel like I’m on my back porch right now,” Morris noted, setting the tone for the most sentimental, heartfelt song of the night, “Hummingbird.” She dished that in 2019, she unknowingly wrote the first song for the album soon after she found out she was pregnant with son Hayes. Morris was in a writing session with the Love Junkies (hit songwriters Liz Rose, Lori McKenna and Hillary Lindsey) when she realized that her first guitar was a Gibson Hummingbird, and her first tattoo was that of the elusive bird.

“I feel like this animal has been following me around my whole life,” she observed. “I had a little hummingbird heartbeat inside of me.” The gentle, acoustic “Hummingbird” immediately tugs at the heartstrings — a recording of Hayes softly saying “mama” opens the song, and it feels more like a lullaby, accented by a faint steel guitar that gives it a dreamlike effect. It’s the type of song you likely won’t make it through without crying, as Morris sings with tender love and care, “Hummingbird / You’re the sound of these strings / I’ll hold you in my loving arms / But I’ll set you free / Hummingbird / Now your heart beats in me.” It is destined to be one of the album’s best moments.

She closed out her small CRS set with a song honoring the theme of the event: Female friendship. “Good Friends” was inspired by Morris’ relationship with her best friend after they had their first fight, with the hitmaker realizing that some friendships are worth fighting for.

“Too much love / Too much dirt / Too much time / Couldn’t leave if we tried,” she chants in the anthemic number. Before wrapping up the night, Hurd made a surprise appearance to proclaim, “I don’t think there’ll be a better country record this year. It’s just that good,” he praised of his wife’s work, sending attendees off on a high note as his bubbly new single, “Pass It On,” co-written by the couple, played over the speakers.

The night was a clear indication of what’s to come with Humble Quest, and fans are in for a gorgeous record that may be the best of Morris’ career so far.

Who had the most played country song during the year you were born? This list is a fascinating time capsule of prevalent trends from every decade in American history. Scroll through to find your birth year and then click to listen. Some of these songs have been lost through the years, many of them for good reason!