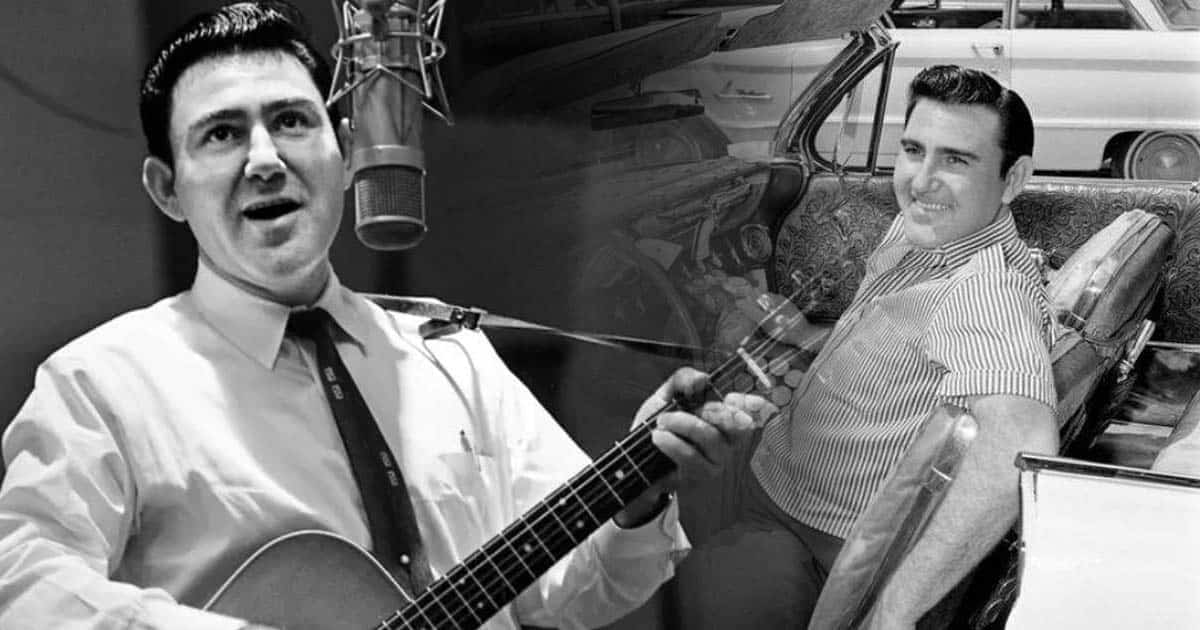 With his aggressive honky-tonk sound, Webb Pierce songs were a hit right out of the box.

Pierce, who was a former salesman moonlighting from time to time to sing country music, had an amazing ear for picking out good tunes. The honky-tonk crowds who turned out at places where Pierce played were delighted by the dancing songs he chose. But more incredibly, they liked the man who sang those songs.

Despite music purists thinking Pierce’s singing technique was painful, the Louisiana native caught the attention of the Louisiana Hayride talent scouts. They knew they had found a performer who would represent them well. Little did they know that this salesman would eventually turn out to be one of the most popular and successful recording artists in country music history.

So, let’s go back down memory lane and play through some of Webb Pierce‘s best hits.

1. In the Jailhouse Now

“In The Jailhouse Now” has been covered many times, but it’s usually credited to Jimmie Rodgers. Artists who have sung it include Ernest Tubb, Johnny Cash, among others – but the best-known version of the song after Rodgers was by Pierce. He took the country ballad on top of the charts in 1955 and kept that spot for twenty-one remarkable weeks, making it the third song in the chart’s history to spend as long. Florida Georgia Line’s “Cruise” beat the record in 2013.

The song was one of Pierce’s more successful singles, reigning at the top of Billboard’s Best Sellers in Stores country chart for seventeen weeks. But more than its commercial success, “Slowly” was incredibly influential in country music history. It’s actually the first – and perhaps the most successful song to date – to feature a pedal steel guitar.

It came courtesy of legendary musician Bud Isaacs, who revealed that he was paid $41 to perform on the country ballad – yet his contribution to the song was beyond measure.

This song has an exciting story to tell! It was co-written by Mel Tillis and Pierce. However, Tillis said he actually wrote the song himself. But when he pitched the song to Pierce, he fell in love with the pair of boots the honky-tonk vocalist was wearing – so he agreed to credit Pierce as a co-writer in exchange for that footwear. “Them old boots cost me over eight hundred thousand dollars,” Tillis said, talking about the royalties.

4. There Stands the Glass

Pierce finds himself drinking to forget a love affair gone wrong in “There Stands the Glass.” The problem was that drinking songs sounded scandalous in the 1950s. Pierce and his record label hesitated to record it due to the possibility that it might be banned and create enough bad publicity to kill his career.

Yet, Pierce felt the song was much too good to simply file away. So, he cut it and broke down a country music taboo.

Co-written by Pierce, the song tells the story of a man who fell out of love with his wife. He wants to start a new life without her, but he lacks the courage to tell her that he’s no longer in love with her. Unlike most of Pierce’s songs, the poignant ballad actually begins with a piano intro rather than a traditional fiddle.

Not only did “More and More” reach No. 1 on the country charts, but it also crossed over to the pop chart, peaking at No. 22. The song finds Pierce moving on from a previous relationship, with each day passing by helping him forget the past.

The song was first offered to Hank Williams, but a song about a husband that’s gone wrong was a little risky at that time. So, Williams’s team did not allow him to record it. But while he was singing it on his early morning radio show, it caught the attention of Pierce, who cut the song and brought it to the top of the charts.

This song has been included in several albums and compilations of Pierce’s music. It tells the story of a man renting a cheap motel room. He had trouble sleeping because of the band in the joint downstairs that kept on playing with a honky tonk beat, shaking his bed.

Though Pierce didn’t actually write this song, he received credit as one of the songwriters for providing the title to Cindy Walker, and she composed it from there. The country ballad became a massive hit in 1982 for country singer Ricky Skaggs.

Though the Riverside Ramblers was the first to record the “Wondering,” it’s best known for the version recorded by Pierce. It became his first No. 1 hit on Billboard’s Country & Western Records Most Played By Folk Disk Jockeys.

This love song, about a man head over heels in love with a woman whose two brown eyes sparkle love, became a massive hit for Pierce in 1955.

Originally recorded by George Jones, the song became the Possum’s first hit after several unsuccessful singles, reaching No. 4 on the country charts. Pierce and Red Sovine blunted that progress when their duet reached No. 1 on the chart.

The single about saying goodbye, making him lonely night and day, became Pierce’s fourth No. 1 on the country charts, staying at the top spot for six weeks.

Though this is a non-charted single by Pierce, it is one of his most notable songs. Skaggs released his version a decade later and took it to the No. 1 spot on the country chart.

Truly, Webb Pierce left us some of the most memorable and extraordinary songs. Keep on scrolling below to find out more of his hits.

How about you? Which among these Webb Pierce songs are your favorite?