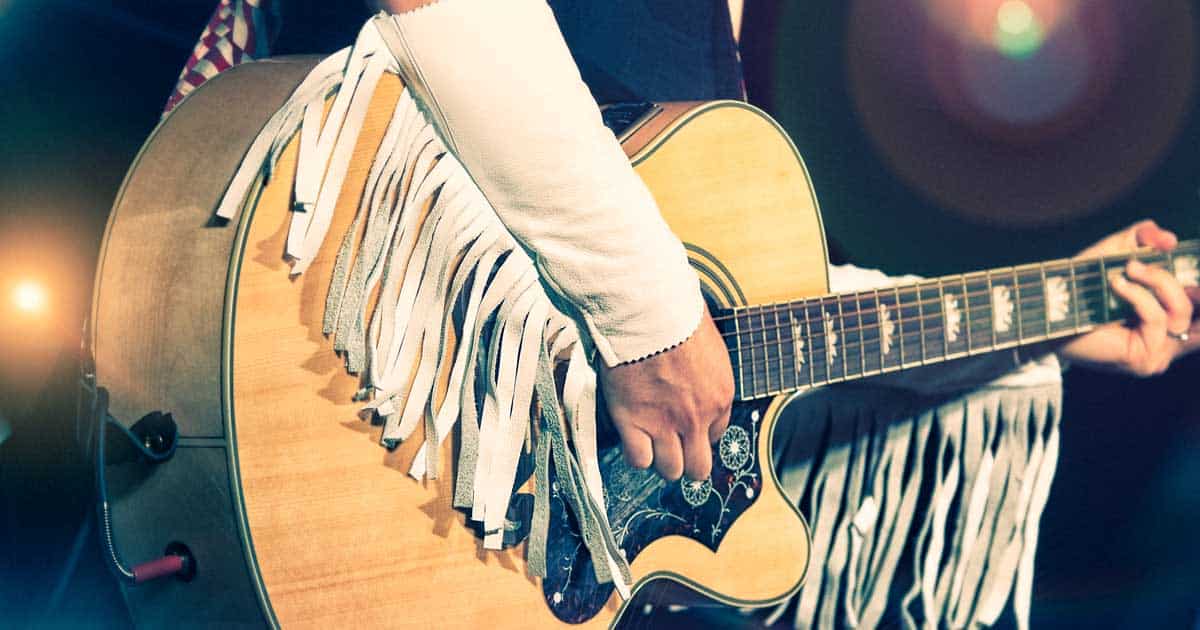 If Elvis Presley is generally considered the King of Rock ‘n Roll, Michael Jackson is Pop’s, then who is the ‘King of Country Music’?

The interesting thing about this is that Country has given all sorts of titles to singers, just like how George Jones and Tammy Wynette are the President and First Lady of Country Music respectively, Jimmie Rodgers as the Father, and Maybelle Carter as the Mother of the genre. But there never has been one anyone crowned undisputedly with the title of ‘King of Country Music.’

Well, there’s a kind of controversial debate around it, as we all know it, And for years until now, there has never really been a general consensus among fans. But there are three most mentioned names who fans think legitimately deserve that royal title: George Strait, Roy Acuff, and Hank Williams. Saving Country Music’s 2016 compendium of country music royalties also agrees.

Though there are those who argue that Johnny Cash merits a spot, and so does Garth Brooks. Chris Stapleton has also been named a few times, but it was more of being next-in-line for the title. And just last year, NBC’s The Voice named Blake Shelton as the King of Country, which led to an uproar of disagreeing comments.

But who really among these names really deserves to be called the ‘King’? Let’s take a recap of their career and their achievements and see who really fits the crown.

What does it take to be royalty in country music?

Before we dive right into the list, let’s first take a very quick look at these two questions: First, why do we have kings and queens in country music, and second, who are the ones who have legitimate claims to these thrones?

Country music has always been into keeping the lineage of the genre alive by paying special homage to singers who helped popularize the genre and reach more audiences. And these royal monikers, which have now formed a royal family in the genre, are universally recognized by the public and are also widely used. While there are still debates about who rightfully owns the titles, there is a list of those who can officially claim them.

Country Thang Daily has always celebrated George Strait as ‘King of Country Music’, and so does the general public of country music fans. And this man deserves every bit of the celebration.

Every country music fan, probably even those who are new, knows the name ‘George Strait.’ His ‘80s songs like “Fool Hearted Memory,” “Amarillo by Morning,” “Lefty’s Gone,” “The Chair,” and “Baby Blue” earned him one chart-topping hit after another. By the end of this decade, George Strait had already earned his 11th number one ‘strait’ hit. It’s undeniable that 1980 was not complete without George Strait songs.

By the dawn of the ‘90s until the 2000s, he continued to establish his name and display his unequaled talent. As they say, with George Strait: what you see is what you’re going to get. Every time he straps on his guitar and steps onto the stage, he delivers pure, straight-ahead country music with a power that makes comfortable and too familiar sounds still fresh and exciting.

And in over three decades worth of career, George Strait has marked himself as one of the greatest artists of his time, and his achievements have yet to be outdone by country music artists today, which is definitely a feat. After all, we’re talking about 60 number one singles, 33 platinum and multi-platinum albums, 70 million albums sold, 60 major entertainment awards, and even a record as the only act in history with a Top 10 hit every year for over 30 years.

Just those alone make him well-deserving of the title ‘King,’ but that’s not all. George Strait has undoubtedly attracted a lot of fans, and even at a time when country music is evolving, he still managed to stay on top. In fact, in 2014, Strait shattered the North American indoor concert attendance for his The Cowboy Rides Away Tour finale at AT&T Stadium in Dallas. There were 104,793 concert-goers in attendance in a 105,000 maximum capacity stadium. Additionally, due to the overwhelming demand for his Strait to Vegas residency in 2016, it went on to extend until 2017.

Needless to say, George Strait straight-up rose to the top and never really slid from there. And that’s why most say that he is the undisputed ‘King of Country Music’ of his generation until today.

Before George Strait, there was Roy Acuff. But unlike Strait, Acuff was not called the ‘King’ for his chart-topping hits and entertainment awards. Rather, he made a claim for the throne with his massive influence in the genre that inspired many country music artists that came after him, including Hank Williams and George Jones, who are also considered greats in the genre.

Roy Acuff didn’t map his life to be a musician, but it was as if life planned it out for him. Playing ball failed to work out for him, so he decided to pick up a fiddle and explore the world as an apprentice of a local medicine man. After a series of unfortunate performances with no significant headways, Acuff found himself standing on top with “The Great Speckled Bird.” That song changed his life and started what Saving Country Music described as his ‘legendary, Hall of Fame-caliber run.’

Acuff’s legendary run can be encapsulated by his two greatest contributions: first, helping make the Grand Ole Opry famous and eventually becoming the master, and second, co-founding the publishing house Acuff-Rose, which later became Sony ATV. In fact, with just these, Acuff had already marked his legacy and established himself as one of the most important figures in country music history. But that was not all of it.

He was country music’s first-ever commercially-successful ‘mainstream’ star, and honestly, if we think about it, country music would never have been an industry if it wasn’t for him. He set a precedent for quality, original music, pioneering an influential vocal style that matched with his simple songs, and on top of that, he also had the business smarts that got country music to the masses. He laid a very important foundation for how country music would be managed from the publishing standpoint from that point forward.

Though his legacy is almost always overshadowed, he remains deserving of the title ‘King of Country Music’, which he had lived up to for more than 60 years.

Hank Williams did not live long enough to enjoy his career, but he definitely made the most out of the years he lived. He was the star of the 1950s, a country music superstar after Acuff, credited to his immense talent in songwriting and impassioned vocal sound. Aside from country music, he also found a place for himself in pop crossover music, where he achieved great success.

Williams was a musical protégé of African American street performer Tee-Tot whose real name was Rufus Payne. Taught Williams his first chords, which he learned to skillfully play by the age of 8. By 13, he already made his radio debut, and at 14, he already formed his first band. Things really came through for him in 1946 when he landed a songwriting contract with Acuff’s co-founded publishing company. Later that year, he signed his first record deal with Sterling Records and then with MGM, where he got his first hit, “Move It on Over,” in 1947. After that, it was just a string of hits, including “Lovesick Blues” in 1949, which was considered his breakthrough moment.

Roy Acuff was a pioneer of his time, and George Strait achieved what no other artist has outdone yet, but Hank Williams was something different. It was his simple, emotionally honest lyrics that spoke to fans and even to a broader audience. Arguably, his music was not groundbreaking, but as country music historian Bill Malone noted, Williams “sang with the quality that has characterized every great hillbilly singer: utter sincerity.” And that is basically the best ingredient to any song that touches the heart of anyone who listens to it. That is why it’s no wonder that fans think he deserves the crown as well.

As he said himself, he was a good imitator of Acuff, but country music already had him. So, he decided to be himself and sing like himself, and that was what made him to one of the greatest country music singers of his time.

Johnny Cash did not belong to those of the technical greats but what separated him from the rest was his unforgettable sound. He had that flavor of unmistakable bass-baritone voice blended with country, rock ‘n roll, and folk sounds. And more importantly, he was willing to explore themes that all other popular artists of his time did not dare touch.

He performed concerts in prisons – first in 1957 at Huntsville Texas State Prison and more at Folsom and San Quentin. His concerts were intense, rebellious, and filled with dark, gritty humor. He never held back, and that was one of the reasons why these live recordings became legendary not only in the US but also internationally.

And this was also something that really resonated with fans of his music and why they argue that he deserved the title just as much as Strait, Acuff, and Williams. Though he did fall away when a new climate emerged in Nashville by the ‘70s, he was still the countryman of the ‘60s. And while fans wait for him to be crowned that title, he remains to be a legendary, timeless musician.

Garth Brooks comes as a runner-up in terms of career awards and decorations to George Strait. The Oklahoman country musician is now considered an icon in the genre, and seemingly, some even mention him as the ‘King of Country Music’ of probably the new generation.

Brooks’ resume is definitely impressive as the first artist in history with 9 Diamond awards and the best-selling solo artist in the US with over 156 million album sales. He has been inducted into different prestigious Hall of Fames and even smashed tour records selling over 6.3 million tickets with his Garth Brooks World Tour with his now-wife Trisha Yearwood. He also collected over 22 Academy of Country Music Awards as well as two Grammy awards.

But as far as calling him King of Country Music now, it’s probably still a stretch. Maybe a couple more years, and Garth would probably be eligible for the crown. We’ll see.