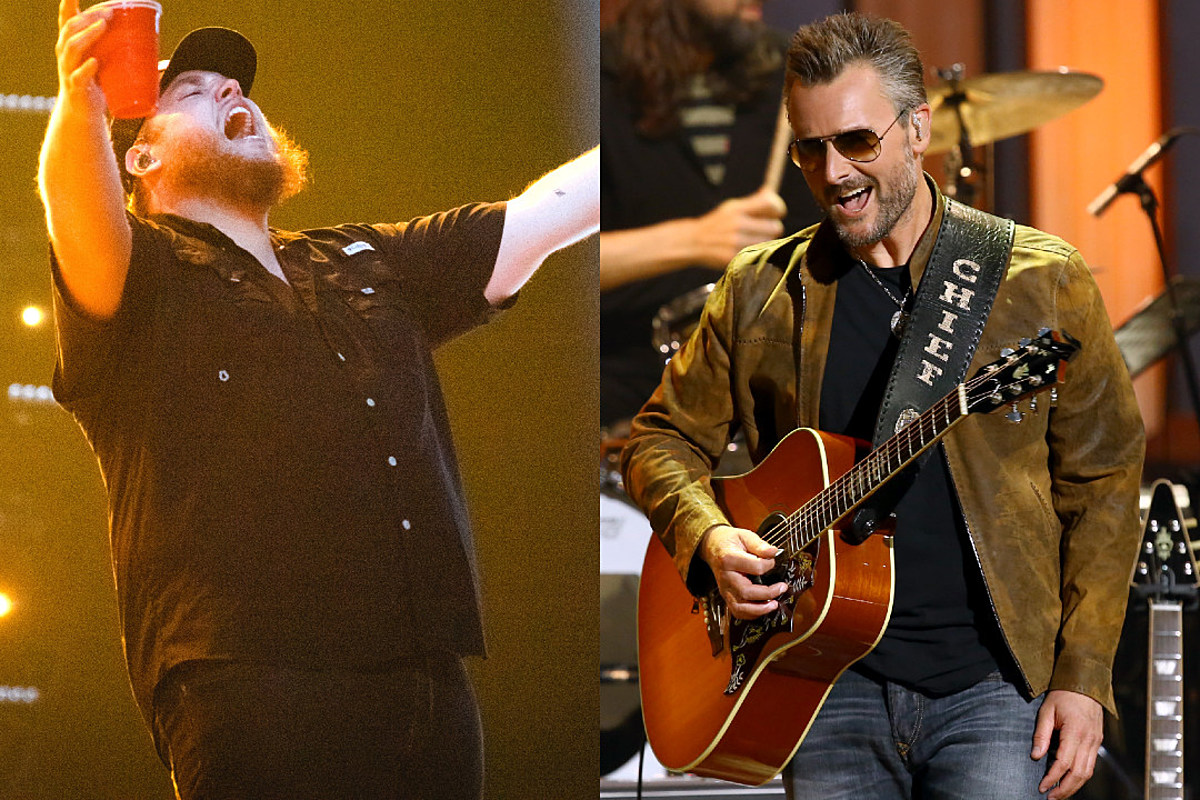 Anyone who knows Luke Combs knows that one of his musical heroes is Eric Church. As his own star has risen, Combs has gotten to know Church first-hand on a few different levels: They duetted on the hit single “Does to Me,” and most recently, they were back-to-back CMA Entertainers of the Year, with Church being crowned in 2020 and Combs taking over the title in 2021.

Combs’ relationship with Church isn’t just business; The two men have become personal friends, too. But apparently, they got off to a little bit of a rocky start, as Combs remembers in a recent installment of CMT’s Probably Shouldn’t Tell You This video series.

The series asks country stars to tell a story that, as the title says, they “probably shouldn’t,” and as he wracked his brain to think of the right story to tell, Combs said he was trying to think of something “PG-13 enough.” When a producer suggested he tell the story of the first time he hung out with Church, Combs initially said that particular anecdote was “too good” to share, but ultimately decided to spill the juicy details.

It all started when Combs and Church happened to be in the same city at the same time for a few days, and Church invited Combs and his wife, Nicole Hocking, over for a steak dinner.

“Eric made the steaks. I was a little bit like, ‘This guy’s the Chief, but is he the chief of the grill? We are about to find out,'” he remembers. “They were fantastic. He didn’t let me down.”

However, unfortunately, there was another respect in which Church was perhaps too good a host: He kept the drinks flowing.

“I was on the whiskey and the rest of them were on the wine,” Combs goes on to say, “but whiskey has just a tad more alcohol than wine does. So I was on another plane of existence that evening than I think everyone else was.”

Combs, who admits he’s “not scared of a refill,” says that Church and his wife, Katherine Blasingame, were impeccable and gracious hosts all evening, but when it was time to head home, he realized that the whiskey might be about to turn on him.

“We had a driver take us home, and I think we made it to the car at 4:30AM, I think is what it was,” the singer recounts. “I had to stop in the middle of this really nice neighborhood. Eric Church got me so drunk that I threw up on the way [from] leaving his house.

“Like, I did not throw up in the house or anything, but in the middle of the road,” he clarifies. “It was kind of, like, semi-college-ish, you know what I mean?”

Combs may have committed a minor party foul in Church’s neighborhood, but it’s not slowing his career down any: The singer recently dropped his newest song, “Doin’ This,” which he says will be the first taste of an upcoming new musical chapter. He’s also set a string of stadium tour dates for 2022.

You’ll find much more than just the Top 10 Country Songs of 2021 on this list.

Our team has sourced fans to create 10 superlatives for this mid-year version of the year-end songs list. Best Country Tearjerker? Best Country Baby-Maker? Best Country Breakup Song of 2021? Keith Urban, Carly Pearce, Chris Bandi and more help make up this portion of the Top Country Songs list, while hitmakers like Thomas Rhett and Little Big Town lead the 10 best songs portion.
Did your favorite song of 2021 make this list? To be considered, the song must have been released in 2021 or have actively charted for a portion of the year (see “Wine, Beer, Whiskey”). New artists including Lainey Wilson, Breland and Triston Marez crack the Top 10. Let us know your favorite song of 2021 at Twitter or email, at staff@tasteofcountry.com.
This article was originally published by Theboot.com. Read the original article here.
Share on Facebook
Share on Twitter
Share on Pinterest
Share on LinkedIn

Midland Drops Music Video For “Sunrise Tells The Story,” Along With A New Acoustic Version
Artist to Watch: Stephanie Jacques on Healing Pain Through Music
Shenandoah Embarking on a 35th Anniversary Tour
Tim McGraw Is Responsible for Tom Hanks’ ‘1883’ Cameo
These 10 Releases Took Folk and Americana to New Heights