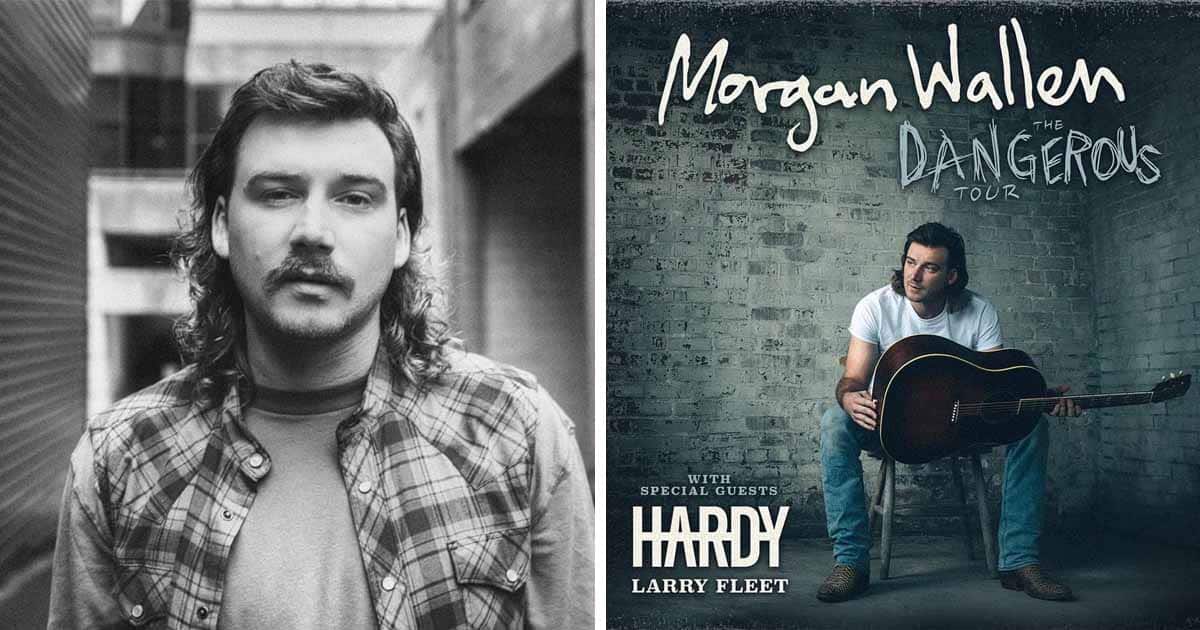 It’s time to get back on the road for one of the most controversial artists in country music. Morgan Wallen has announced The Dangerous Tour, which expects him to be touring across the United States for nearly eight months in 2022 – kicking off the first leg on February 3 at Ford Center in Evansville, Indiana.

The massive tour is actually composed of more than 45 shows and maps out performances inside Madison Square Garden in New York City, the Staples Center in Los Angeles, Ball Arena in Denver, Colorado, Bridgestone Arena in Nashville, two shows at the Bank of New Hampshire Pavilion, among others.

Things would then wrap up on September 24 at Staples Center in Los Angeles, California. Fellow country singers HARDY and Larry Fleet will also be opening the show for Wallen.

“Here we come,” Wallen tweeted, announcing the latest – and without a doubt, the biggest – step the country star took to return to the limelight nearly a year after a video surfaced of him shouting a racial slur in Nashville.

In case you missed it, Morgan Wallen was seen in the video noisily coming home from a night out with his friends and can be heard saying the N-word and profanities in reference to another person he was with.

“I used an unacceptable and inappropriate racial slur that I wish I could take back,” Wallen said in a statement, adding that there was no excuse for using such language and sincerely apologizing for using such a word.

He ended the statement with a promise of improving himself for the better.

He has since released a more detailed apology, has met with executives and leaders of the Black organization, and has been sober – acknowledging that most of his misdeeds took place under the influence of alcohol. He even requested his followers to stop defending him. Wallen stressed this is just the start of the process and told listeners that there’s no reason to downplay what he did.

Backlash Came Swiftly For Morgan Wallen, But Proved To Be Only Temporary

However, the implications for Morgan Wallen’s actions were swift. It did not only take two days for Wallen to be pulled from hundreds of radio stations and be yanked out of streaming services from their curated playlists. His booking agency, WME, kind-of, dropped him, as well.

Even fellow country stars such as Mickey Guyton, Jason Isbell, and Maren Morris spoke out against him.

Meanwhile, Wallen has also expressed that he’s going to continue to take “time away” from performing until he’s completed working on himself. This led to the cancellation of all his 2021 summer appearances, including a string of Luke Bryan arena shows.

Many predicted that Wallen’s career was over after that, but instead – it only sparked the beginning of a record-setting career for the country singer.

With his fans sticking by him, the sales of Morgan Wallen songs went soaring high that his “Dangerous: The Double Album” became one of the best-selling releases of the year, helping him remain on top of the Billboard 200 chart for four straight weeks.

His position on Spotify’s top streaming charts also saw an uptick. Even his social media following is seeing an increase.

Wallen’s career kept taking a small step forward until last August, his music officially returned to country radio with the release of “Sand in My Boots.” The slow-burning heartbreaker currently sits at No. 14 on Billboard’s Country Airplay chart while reaching No. 5 on the Hot Country Songs chart.

He also returned to the stage last September at his sold out headlining show at Marathon Music Works in Nashville, together with his Big Loud label mate HARDY, and newcomer Madison Kozak. Prior to that, he made a surprise appearance at Luke Bryan’s headlining concert last summer at Nashville’s Bridgestone Arena, joining Bryan, Jason Aldean, and Florida Georgia Line’s Tyler Hubbard during the acoustic portion of the show.

Not only that, but the singer-songwriter was up for two awards, Favorite Male Country Artist and Favorite Country Album, during the recently concluded American Music Awards, which were based solely on Billboard chart data.

Well, one thing is certain – great music resonates with people.

Tickets for Morgan Wallen’s The Dangerous Tour are now up for sale. Make sure to purchase it before it sells out.