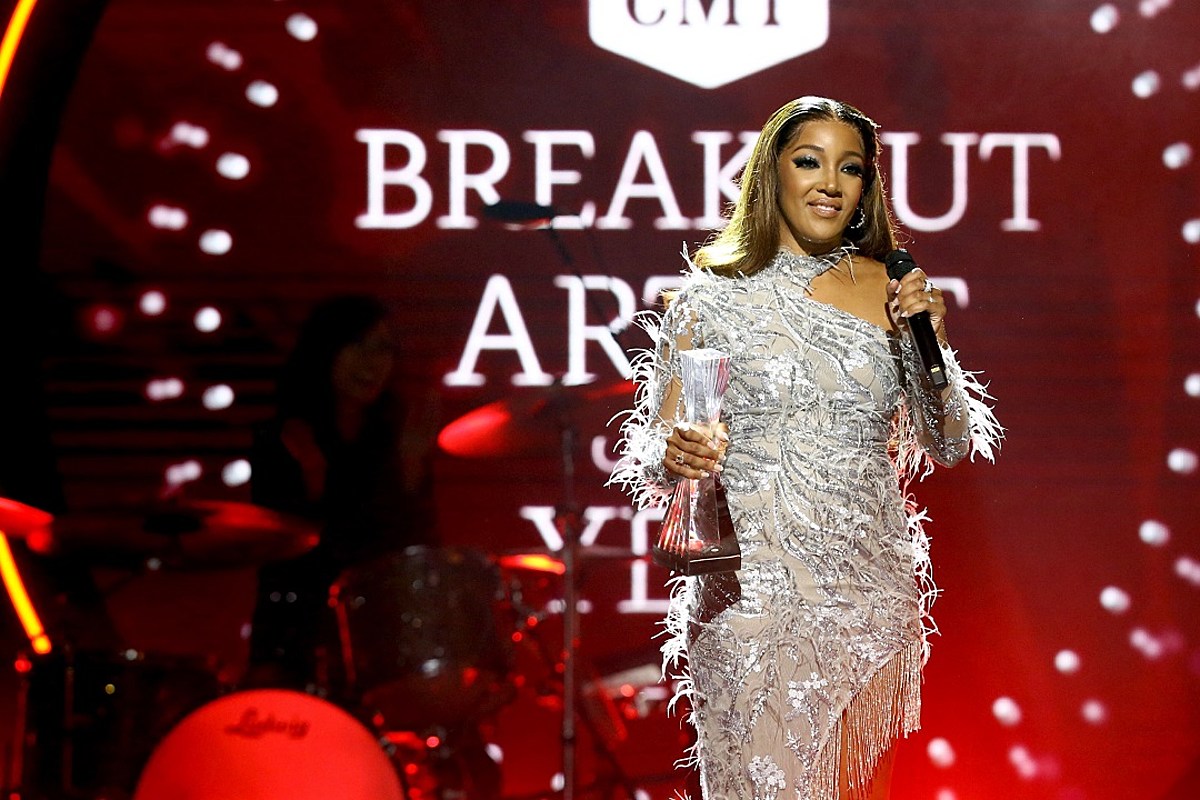 Mickey Guyton, CMT’s 2021 Breakout Artist of the Year, gave the most powerful and eloquent speech of the night during Wednesday night’s (Oct. 13) CMT Artists of the Year event. Dedicating her win to everyone who helped get her to this point in her career, she pledged to continue to celebrate and platform overlooked and marginalized artists.

“To that little 7-year-old Black girl at home, that indigenous boy, that LGBTQIA+ teen and that Latino boy or girl, and anyone marginalized or unseen — and, yes, even the haters on social media — this is for you,” Guyton said from stage. “I am here for you.”

Guyton — who released her debut album in September, after a decade with her Nashville record label — reflected in a pre-taped segment about how it feels to, after years, have her moment in the spotlight: “It feels like my moment, but I’m so used to kind of just being in the background, almost there, that it doesn’t feel real,” she said. Onstage, she recognized the people in Music City who, along with her husband, kept her going even after she’d “completely given up on myself and my dream to sing the genre of music that I held so close to my heart.”

“I’m so grateful,” Guyton added. “So many of you guys put me on a platform when you had no incentive to do so, and I take that and I honor it, and I will do the same for other up-and-coming artists.”

Guyton, as in past interviews and public appearances, was not shy about explaining the bumps and roadblocks she’s experienced along the way in her career. “For about seven years, I tried to do everything that I could to fit in, and I wasn’t necessarily my most authentic self,” she admitted, explaining that, to achieve her goals, she “had to learn to write my story and not someone else’s story.”

Guyton’s story includes “What Are You Gonna Tell Her?” and “Black Like Me,” two socially-minded songs that arrived in 2020; it also includes songs such as “Love My Hair,” “All American” and “Remember Her Name,” empowering moments on her debut album, Remember Her Name. On Wednesday night, she and Yola performed the album’s title track at the CMT Artists of the Year event — a performance introduced via video by Misty Copeland, the first Black woman ever named principal dancer for the American Ballet Theatre — and received a standing ovation at the end.

“When the door closes, somewhere [God] opens a window. And, in my case, he shattered a whole glass ceiling,” Guyton said, adding, “I made it my life’s purpose to show that country music really is everyone’s music — that if you just take a moment and step outside of yourself, you will see and hear some of the most beautiful music that you will ever hear, from so many amazing people.”

In addition to Guyton, the 2021 CMT Artists of the Year event included honors for Kelsea Ballerini, Gabby Barrett, Kane Brown, Luke Combs and Chris Stapleton, along with the 2021 CMT Artist of a Lifetime, Randy Travis. The event took place at Nashville’s Schermerhorn Symphony Center.

There have been many creative country albums in 2021, but not all have hit the mark. Artists are more than ever toying with distribution methods and packaging as much as they are new sounds, so you get double and triple albums, Part 1 and Part 2, and digital EPs in lieu of a traditional 10 or 11-song release.

The bar for an EP on this list of the best country albums of 2021 is higher than an LP, but one project did crack the Top 10. Too much music proved to dampen other artist’s efforts, although Alan Jackson’s first album in years was filled with country music we couldn’t turn away from. Where Have You Gone has 21 songs, but somehow no filler.

More than ever, this relied on staff opinion and artistic merit to allow for some parity among major label artists and independents. The 10 albums listed below are not ranked, although the year-end list published in the fall will crown a true best album of 2021.

Luke Combs’ NFL Thanksgiving Halftime Show Was a Three-Hit Medley
Scotty McCreery Recalls George Strait’s Help to Win American Idol
Luke Combs Spills the Story of How Eric Church Once Got Him Drunk
King of Country Music: Who Should Be Really Wearing the Crown?
Miranda Lambert Stopped Singing And Broke Down In Tears After Spotting This Soldier’s Sign