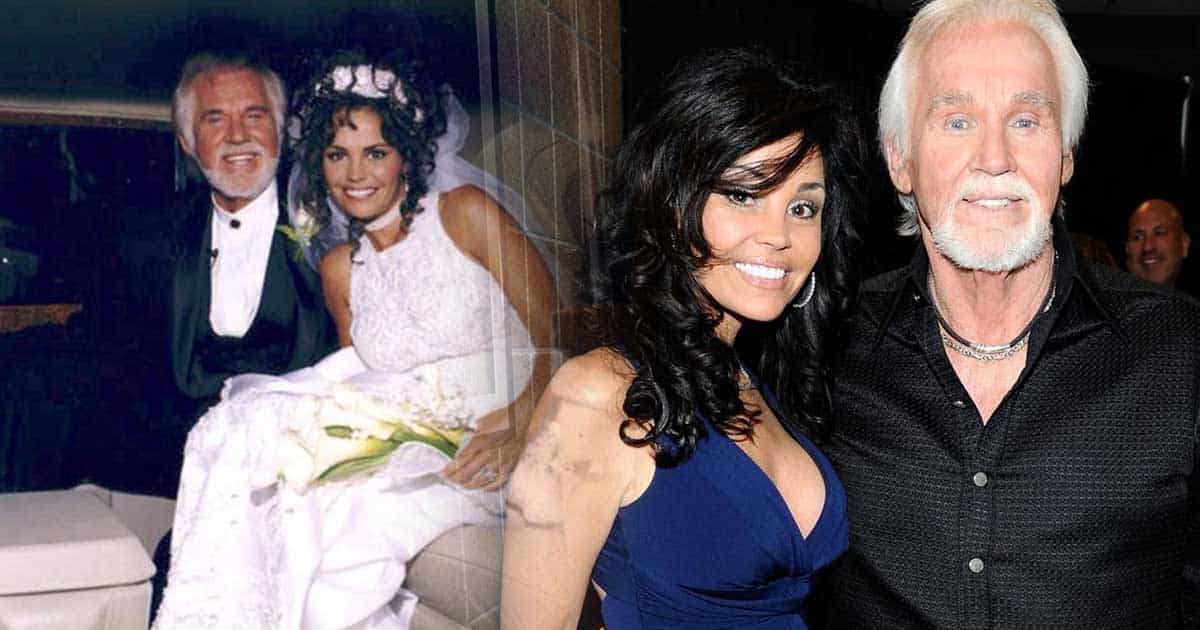 Kenny Rogers and wife Wanda Miller have been through a lot before they finally got their happy ever after. Their 28-year age gap and the fact that Rogers was two years older than Miller’s parents built a tall wall, but they didn’t give up, and they made it work. The two dated for five years before tying the knot and spending 22 lovely years together before Rogers died last year due to natural causes.

And if there was anything that their story told us, it was love that bridged all the gaps. So, let’s go back to the moment where everything started and how they overcame everything.

Kenny Rogers had been married four times before he finally met the one that he would spend the rest of his lifetime with. In an interview with Reuters journalist Jill Jacobs, he shared how his music career played a role in all of his failed marriages. He said that music was like a mistress, and a difficult mistress for a wife to compete with at that.

Rogers explained that when he became so driven and selfish, he was so intent to follow his life that it cost him. He was gone so much from his marriages that there was a disconnect. But he loved each and every woman he married, and he never put the blame on them for the marriage falling apart.

After that, he was just casually dating around, and it was during one of those dates that he finally met the woman he would spend the rest of his lifetime with.

Rogers’ friend Charlie Minor set him up on a blind date at Pricci Restaurant in Atlanta, Georgia. Right during the middle of his not-so-going-good date, Rogers saw Miller, who was working her night shift then. According to him, he wasn’t sure if she even looked at him, but he saw her. And there was just something incredibly different about Miller. Rogers shared that she had this genuine smile that rocked him to his core.

He didn’t move to ask her right away out of respect for his date. But the same night, he called the restaurant, asked about her, and then left his phone number with one of Miller’s coworkers. When she came in the next day, the staff told her that Kenny Rogers was asking about her, but she didn’t believe them at first. So, she threw the phone number away. Finally, her co-workers convinced her that it was real. She returned the call, and then they started dating.

Kenny Rogers’ wife, Wanda Miller, was born in Lowndes County Georgia, with her twin sister Tonia on November 6, 1966 to parents Charles and Teena Miller. She attended Valdosta High School, where she graduated in 1985.

Miller and Rogers had been dating for almost six months before Miller worked up the nerve to tell her parents about their relationship. And they were definitely not thrilled. Aside from their 28-year age gap, he was also two years older than her parents. In an interview with Fox News, Rogers confessed that Miller’s parents called to tell him that they didn’t appreciate what he was doing with their then 26-year-old daughter.

Second Chapter: Finally Got It Right

The couple dated for five years before finally tying the knot on June 1, 1997 at Rogers’ ranch near Athens, Georgia. This was the fifth and the last time that he would be saying “I do.”

Rogers was first married to Janice Gordon in 1958, but they called it quits just two years later. After that, he married Jean Rogers, but just like his first, the marriage didn’t work out in the end. In 1964, he tied the knot with Margo Anderson. Unlike his first two marriages, his marriage with Anderson lasted 12 years. Then lastly, he exchanged vows with Marianne Gordon, with whom he had three children – a daughter named Carole and two sons named Kenny Jr. and Christopher.

As for Miller, it wasn’t her first rodeo either, having been married once before.

In a later interview, Rogers said that his marriage with Miller was the most rewarding of all. Although he loved every woman he had been with before, he just wasn’t ready back then. He had a lot of things, the biggest and the best of everything, and he made loads of money.

Kenny Rogers’ other half Wanda Miller gave birth to twin sons in 2004. At first, Rogers actually didn’t want to have kids. But his wife didn’t have any, and when she turned 31, she really wanted to have one. So, he did some soul-searching and realized that it was unfair of him to take away her childbearing years. So they went for it, and he was definitely thrilled when he was told it was going to be twins.

Soon after, the country music icon retired and devoted more time to his wife and kids. Kenny Rogers and wife Wanda Miller were married for 22 years before Rogers passed away last March 20, 2020.

Dolly Parton Sings “I Will Always Love You” to Kenny Rogers

Dolly Parton Sings “I Will Always Love You” to Kenny Rogers

Wynonna Judd’s “She Is His Need:” A Song about How Love Conquers All

Wynonna Judd’s “She Is His Need:” A Song about How Love Conquers All

How Blessed I Am ‘Cause “He Came Looking For Me”

How Blessed I Am ‘Cause “He Came Looking For Me”

Wanda Miller: 8 Fast Facts About Kenny Rogers’ Other Half,

Wanda Miller: 8 Fast Facts About Kenny Rogers’ Other Half,

Female Country Singers Who Smoke Cigarettes: Who Is On The List?