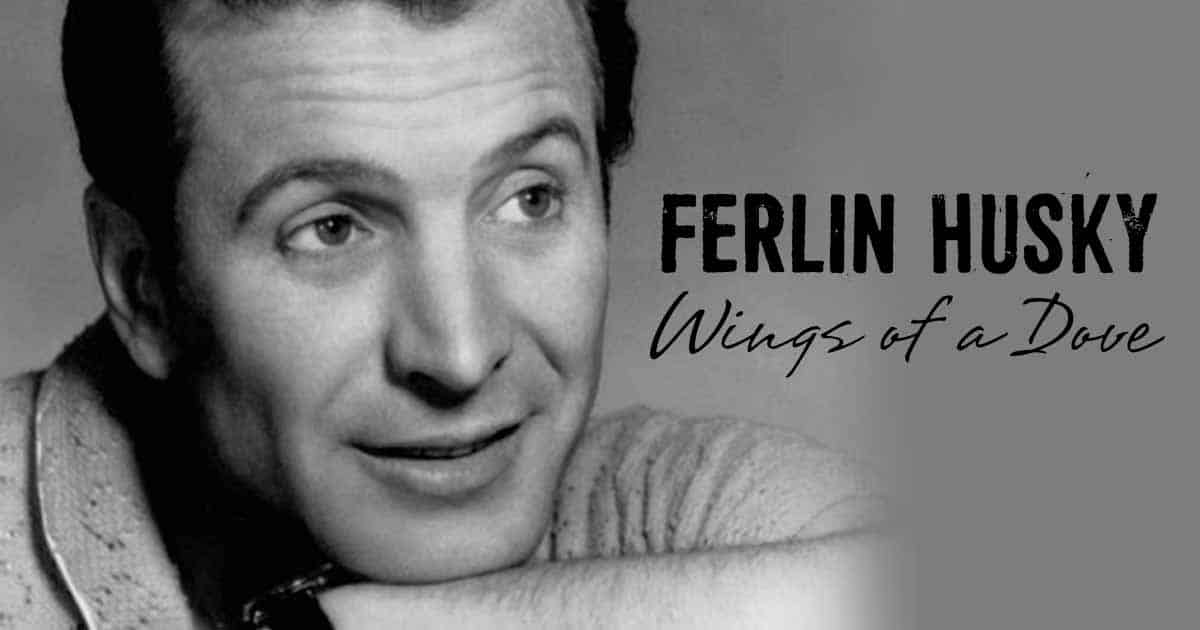 Country Music Hall of Famer Ferlin Husky was best known for his third and final country No. 1 hit “Wings of a Dove.”

He recorded the country gospel in 1960, and it went to No. 1 on the Billboard Hot Country songs, which at the time was published under the title Hot Country and Western Sides. It held the top position for ten nonconsecutive weeks and spent a total of nine months on that chart. “Wings of a Dove” was also a crossover success as it peaked at No. 12 on Billboard Hot 100.

Written by Nashville songwriter and producer Bob Ferguson, “Wings of a Dove” tells the Biblical story of Noah’s Ark – the verse Genesis 8:6-12, in particular. After forty days of drifting on the flooded land, Noah sent out a dove from the ark to examine if the water has subsided. After his second attempt, the dove came back with an olive tree leaf in its beak.

Noah knew right then and there that the water had started to recede from the land. This is why the image of the dove carrying an olive tree leaf grew into a lasting symbol of peace in Christian art.

In other parts of the scripture, the dove also depicts the Holy Spirit. If you could recall Jesus’ baptism at the Jordan River, heaven suddenly opened while Jesus was praying, and the Holy Spirit came down in the form of a dove. That moment was associated with the Lord’s love as a voice from above said, “You are my Son, whom I love, and I am very pleased with you.”

Ferguson wrote the song in 1958 while producing a series of films for the Tennessee Game & Fish Commission. “This is a personal expression of faith and joy in achieving a goal,” he said about the song. “When I wrote it, I had just completed thirteen films on wildlife, and I was elated that the job was done.”

The song has since been covered by many artists, including Bonnie Guitar, George Jones, Loretta Lynn, Dolly Parton, and Ricky Skaggs. Dolly Parton once again covered the song in 1993, but this time it was with Tammy Wynette and Loretta Lynn for their collaborative studio album Honky Tonk Angels.

Indeed, “Wings of a Dove” is one of the most enduring songs of all time. In 1987, Ferguson even received the “Million Air Plays” Award from Broadcast Music Incorporated.

“When troubles surround us when evils come, the body grows weak. The spirit grows numb. When these things beset us, he doesn’t forget us. He sends down His love on the wings of a dove,” the song goes. You can listen to it in the video below.

“Wings of a Dove:” An Amazing Cover Done by Dolly Parton

The “Gentle Giant” Don Williams and his Seventeen No.1 Hits

Randy Travis to Release Memoir Entitled “Forever and Ever, Amen”

“Without Dolly Parton, Carrie Underwood May Not Have Existed”

Remembering The Highwaymen’s Hit Song “Desperados Waiting For A Train”

How Country Artists Responded to Nashville Bombing at Christmas Morn’