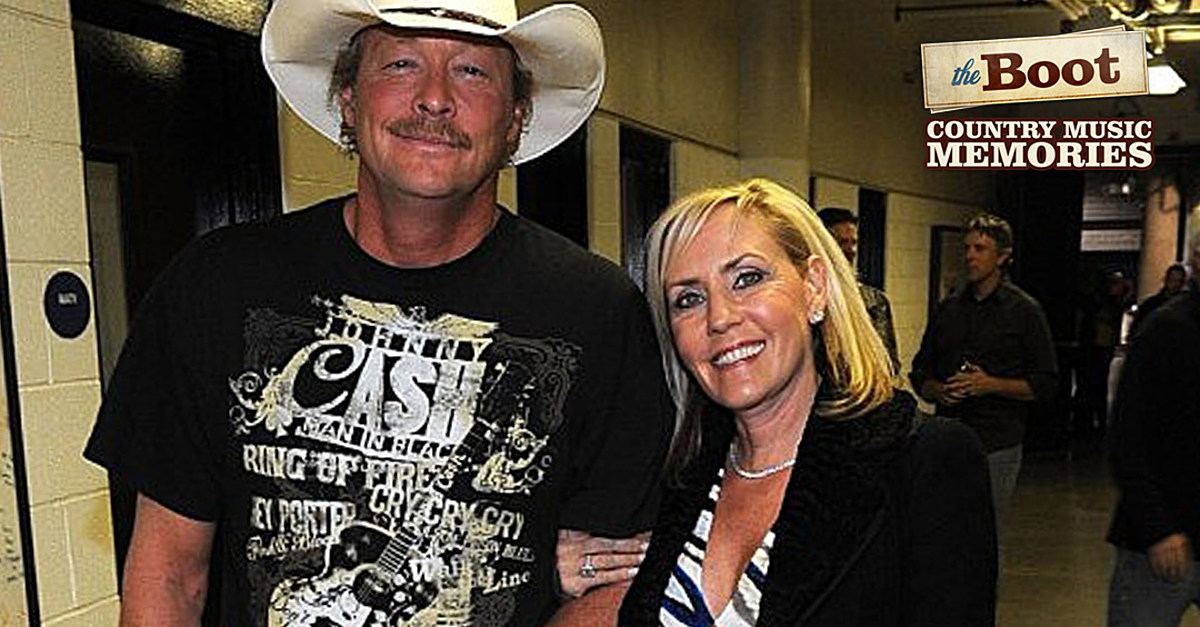 Happy anniversary to Alan Jackson! Forty-one years ago today (Dec. 15, 1979), Jackson wed his wife Denise (nee Jackson — no name change for her!), his high school sweetheart, at the Newnan Baptist Church in their hometown of Newnan, Ga.

The Jacksons moved to Nashville after six years of marriage so that Alan Jackson could pursue a career in country music. In fact, it was his wife who ultimately helped Jackson land his first recording contract: While working as a flight attendant, she ran into Glen Campbell and told him about her talented husband. Campbell took an interest in the young man and helped the future country legend get a record deal with Arista Records.

But it hasn’t always been smooth sailing for the Jacksons: After becoming parents to three girls, Mattie, Ali and Dani, they separated (briefly) when their youngest daughter was a year old, in 1998.

“We were just kids when we started out,” Alan Jackson explains to People magazine. “We didn’t ever have the chance to fall in love as adults and to learn who you are before making a commitment. I think we lost some of that original feeling. I did anyway.”

Happily, the two reunited after four months, renewing their vows on their anniversary in 1998, and their marriage remains stronger than ever.

“We learned that if a relationship’s going to be good, you have to make it a priority,” Denise Jackson admits. “Even if it’s just getting up 30 minutes before the children do in the morning, having our coffee and being together uninterrupted. Or sitting on the porch in the afternoon for 10 minutes to catch up on our day.”

Denise Jackson wrote about their separation, and a brief affair her husband had, in her memoir, It’s All About Him: Finding the Love of My Life, in 2007. The book also shared how they bounced back from the tumultuous time to heal their marriage.

“At first he was a little nervous [about the book],” she admits to Newsweek. “It’s not enjoyable to talk about your mistakes and regrets. But on the other hand, he knew why I wanted to write the book and that it was important for me to admit that he had been unfaithful, because one of the main messages of the book is about forgiveness and how healing can come when we work through problems and infidelities. Probably half the marriages out there experience what we do, but there’s only a very, very small percentage that really survives.”

For his part, the “Gone Country” singer remains focused on making sure their marriage remains strong and healthy for years to come.

“I don’t care if it’s somebody that seems compatible or your soul mate,” Alan Jackson tells The Boot. “You have to work at it all the time. I always find that most times you treat strangers nicer than you do somebody that’s close to you, and if you learn to do that, that makes a big difference.”

WATCH: How Well Do You REALLY Know Alan Jackson?

Toby Keith’s “Who’s That Man” is a Painful Song for Divorced People
Crisis of Faith: New Johnny Cash Movie Doesn’t Know If It’s a Documentary or a Sermon
The Milk Carton Kids Announce New Album, Share ‘When You’re Gone’
Morgan Wallen Will Take 2023 ‘One Night at a Time’ on a Massive World Tour
Shania Twain Announces a Fall Leg of Her 2023 Queen of Me Tour