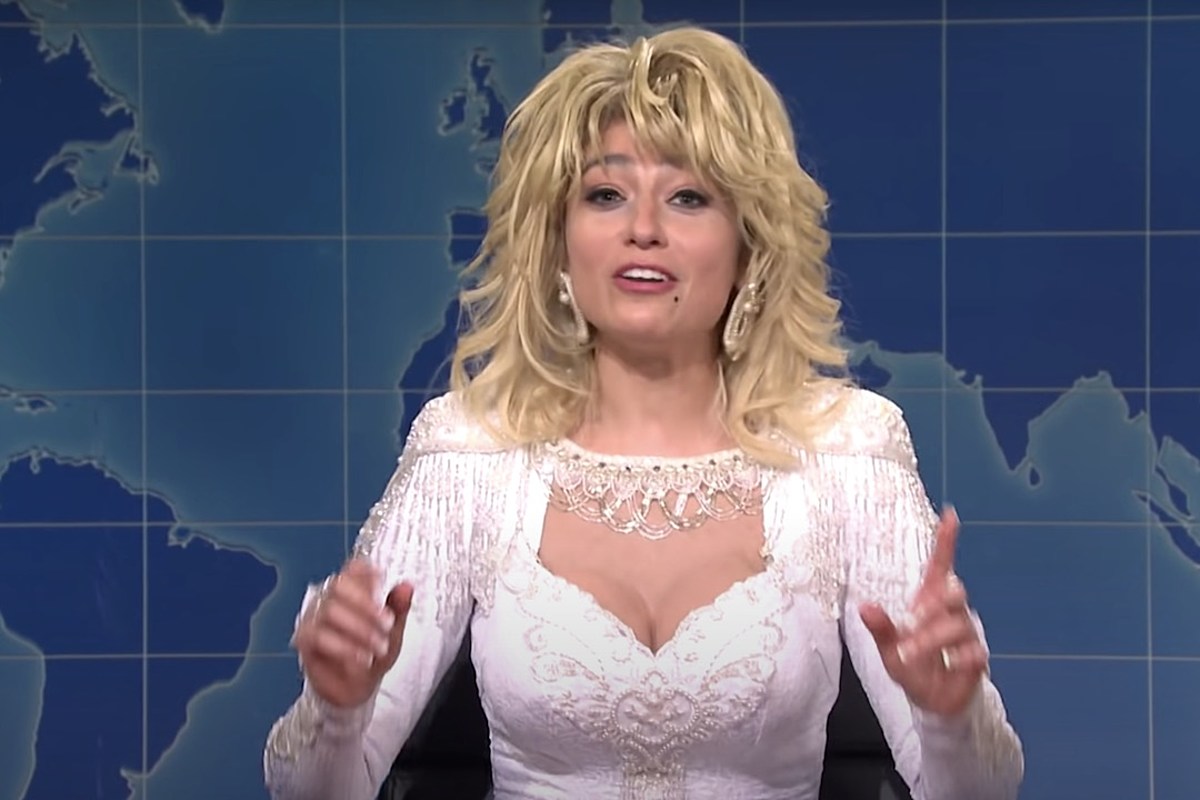 Comedian and master of impressions Melissa Villaseñor wants to be just like Dolly Parton, and can you blame her? The Saturday Night Live cast member tried out her best impression of Dolly during the latest episode of the show, during the “Weekend Update” segment.

Villaseñor was ostensibly taking the stage to talk about some of her favorite Christmas albums, but it was immediately apparent that she had something else in mind, as she rolled onto the screen donning a feathery blonde wig, decadent white ensemble and a couple more of Parton’s trademark … assets.

Still, she denied the connection, going on to sing a couple of Christmas songs—- and nailing an impression of Parton’s signature voice as she performed first “A Holly Jolly Christmas” and then an approximation of “Jingle Bells” set to the tune of the country superstar’s classic “Jolene.”

Finally, Villaseñor came clean about her Parton fandom, and frankly, her reason for emulating the singer made a whole lot of sense. “Yeah, newsflash: I want to be Dolly. Who doesn’t?! She’s the coolest,” she deadpanned to the “Weekend Update” segment’s co-anchor, Colin Jost.

“She’s a great singer, she writes her own songs, she donated $1 million to the vaccine,” Villaseñor continued, before launching into a joke. “Plus, there was a news story this week that she saved a kid from getting hit by a car … which made me mad, because I was speeding up to hit him!”

All jokes aside, the comedian’s Dolly fever is understandable: Parton has been one of 2020’s heroes, easing a difficult year both in her music (with her Christmas album, A Holly Dolly Christmas, as well as timely songs like “When Life Is Good Again”) and outside of it. She’s spoken out in support of her fellow female songwriters, put on a holiday TV special, voiced her solidarity with the Black Lives Matter movement — and yes, she saved a child from an oncoming car and made a donation to help fund research for one of the leading COVID-19 vaccine candidates.

Villaseñor rounded out her Dolly-themed sketch with a rousing rendition of Parton’s 1980 hit “9 to 5.” It was a pitch-perfect impression of the singer, and not the first time that SNL has featured an homage to Parton. The singer was previously impersonated on the show in 2011 by Kristin Wiig, in 2006 by Amy Poehler and twice in 1979 by Jane Curtin.

Parton herself has also graced the SNL stage in person: She hosted the show in April of 1989.

How Well Do You Know Dolly Parton? Take the Quiz: