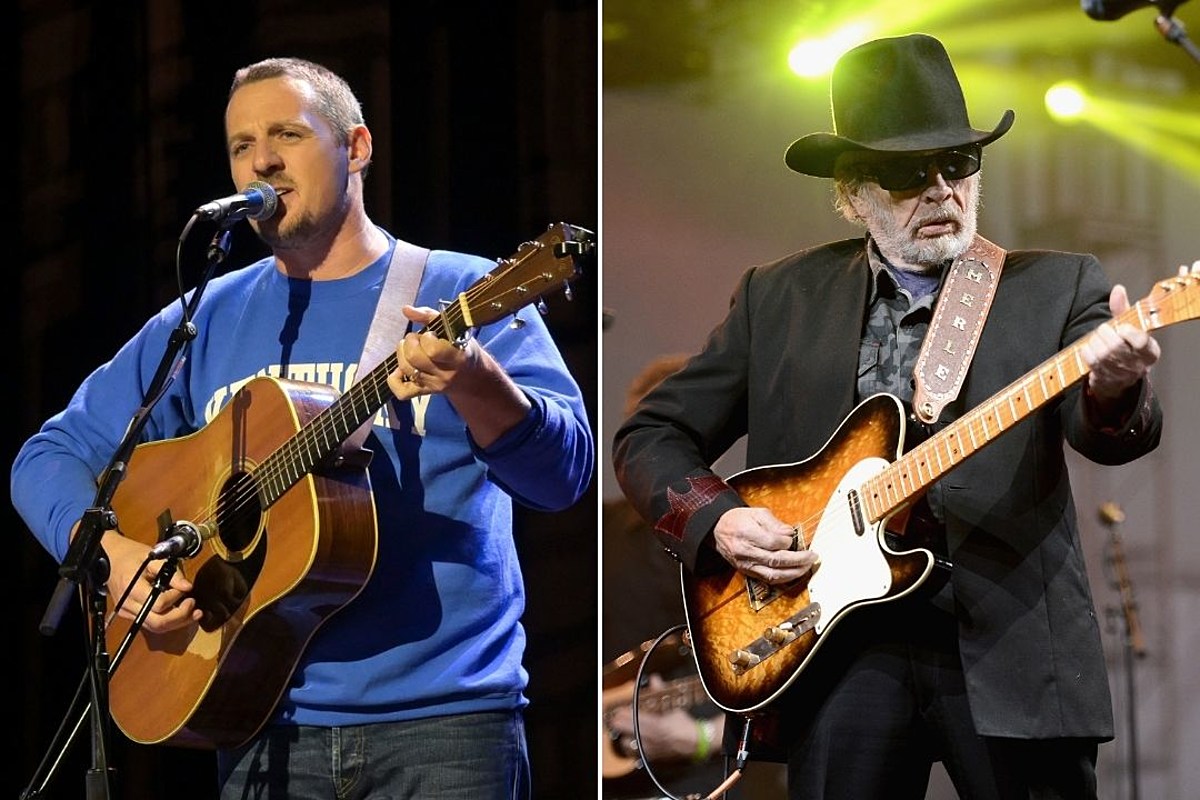 Sturgill Simpson‘s newly released Cuttin’ Grass Vol. 2: The Cowboy Arms Sessions features bluegrass versions of songs in his back catalog — that is, until its 12th and final track.

The album-ending “Hobo Cartoon” is a previously unreleased song, co-written by none other than the late Merle Haggard. Simpson has been “sitting on [the track] for about four years,” he tells tells fellow musician Elizabeth Cook on her SiriusXM Outlaw Country show, Elizabeth Cook’s Apron Strings, and finally opted to “cowboy up” and cut the song for his new record.

Haggard and Simpson became friendly during the final two years of the country icon’s life: “He would call a lot,” Simpson remembers in press materials for Cuttin’ Grass Vol. 2. “We’d talk on the phone a lot.”

As Simpson recalls it, Haggard penned “Hobo Cartoon” “when he was in the hospital on his deathbed.”

“e was writing a lot at that time,” Simpson notes. “I think he was optimistic that he was gonna come out of there and be okay.”

One day, without any real explanation, Haggard sent Simpson the lyrics to “Hobo Cartoon” via text, along with “a text that just said, ‘From one railroad man to another.'” (Simpson used to work for the Union Pacific Railroad; Haggard, meanwhile, grew up in a railroad boxcar-turned-home with a father who worked for a rail company, and the singer himself ran away by hopping freight trains as a kid.)

“It was just the lyrics,” Simpson notes of Haggard’s message to him. “We never got to finish the song together.”

Simpson had considered putting “Hobo Cartoon” on a different project (he does not specify which one), but never did. However, he adds, Haggard “loved bluegrass a lot,” so when he and his band hit the studio for the Cuttin’ Grass sessions, he knew the moment was right. He finished the song’s melody, and got the approval of Haggard’s widow Theresa and son Ben.

“It just felt weird to imagine it with some big eight-piece band. Merle loved bluegrass, so it felt like a proper homage, really exposed and stripped down to the root of something,” Simpson says in album materials. “Maybe I’ll recut it with a hard country band one day, but it just seemed like a beautiful way to end this chapter.”

After his tour with Tyler Childers was canceled due to the novel coronavirus pandemic, Simpson put out his first bluegrass album, Cuttin’ Grass Vol. 1: The Butcher Shoppe Sessions, on Oct. 16. The 20-track project features all songs previously released by Simpson or Sunday Valley, the band he was in before beginning his solo career.

Following the release of 2019’s Sound & Fury, a full-fledged rock album that is nominated for Best Rock Album at the 2021 Grammy Awards, Simpson admitted that he spent $1.2 million making the record and its corresponding anime film in an effort to distance himself from his record label, Elektra Records. In an interview published in February, Simpson threatened to quit music unless the label dropped him, railing against the music industry, producer Dave Cobb and the Recording Academy, which runs the annual Grammy Awards.