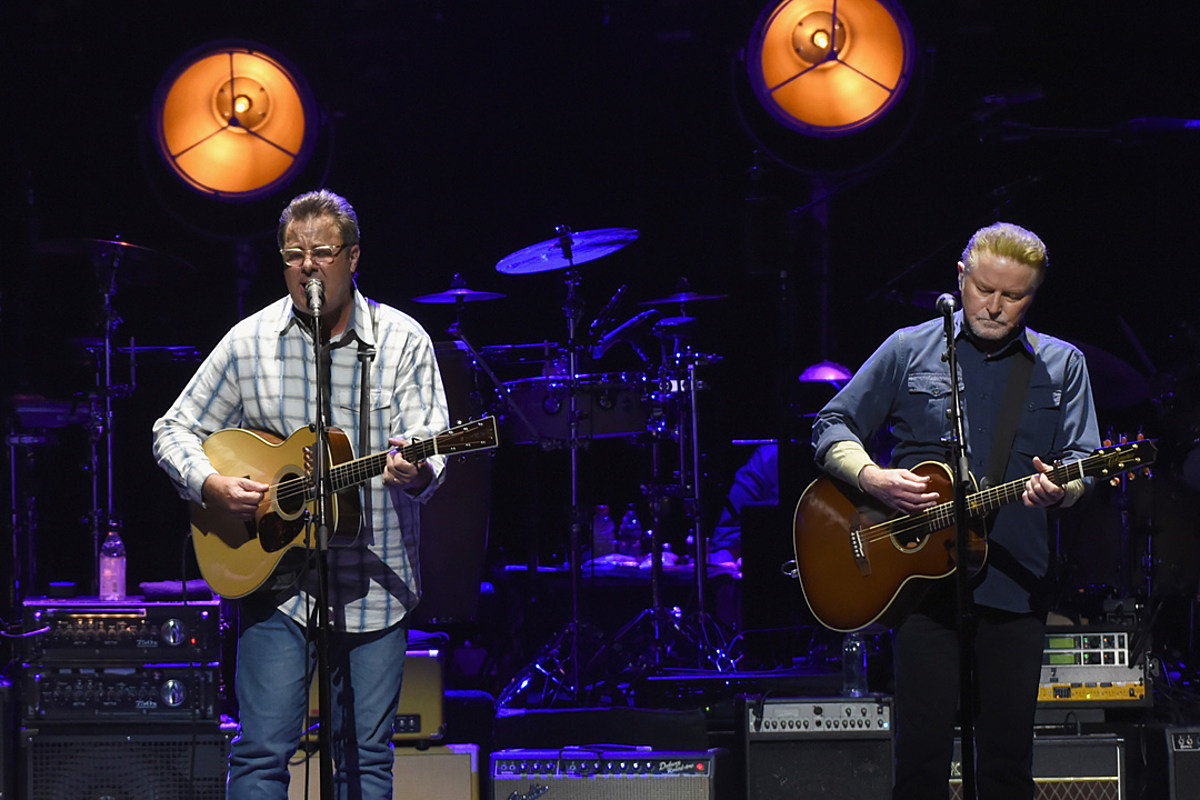 Vince Gill might not be the first guy you’d have thought of as a replacement for Glenn Frey in the Eagles, but wow, is he a good fit. The country icon soars as he takes over lead vocals on the Eagles’ classic hit “New Kid in Town” on their new live album.

Gill steps to the mic to take over for Frey on the song, which Glenn Frey co-wrote with Eagles drummer and singer Don Henley and their longtime collaborator, J.D. Souther. His choirboy-pure tenor proves to be a gorgeous replacement for Frey’s note-perfect, understated original performance on the classic. Listen to Gill’s take on the iconic track below:

“New Kid in Town” gave the Eagles a No. 1 hit on Billboard‘s Hot 100, as well as a No. 2 hit on the adult contemporary charts when they released it as the lead single from their landmark Hotel California album in 1976.

Gill surprised both his fans and longtime Eagles fans when he joined the group in 2017, following Glenn Frey’s death in 2016. Gill and Frey’s son, Deacon, joined classic-era members Henley, Timothy B. Schmit and Joe Walsh in a new lineup that has toured ever since, and both Gill and the younger Frey make their recorded debuts with the group on the new Live From the Forum MMXVIII package, which the Eagles released on Oct. 16.

The 26 live tracks draw from three shows the iconic group performed at the Forum in Los Angeles in September of 2018. The setlist features most of the Eagles’ greatest hits, including “Lyin’ Eyes,” “Hotel California,” “Seven Bridges Road,” “Take It to the Limit” and more.

In a recent interview at the Musicians Hall of Fame and Museum in Nashville, Gill says he understands the criticism he’s received from some Eagles fans after stepping in to sing Glenn Frey’s classic songs.

“It’s different, and it’s not as good as the original,” he states. “I don’t sing like Glenn, and I don’t pretend to. I see a lot of people making negative comments about me being in that band … I get it. It’s my favorite band, too. I don’t want to hear me sing ‘New Kid in Town,’ but the other option is not possible. So I’m just trying to do my part to keep some great songs afloat.”

See Photos From the Eagles’ First Gigs Without Glenn Frey:

Randy Travis’ “He’s My Rock, My Sword, My Shield” Is A Reminder To Always Have Faith In Jesus
Here’s How The Beautiful Hymn “Midnight Cry” Came To Life Out Of A Visiting Priest’s Sermon
Top 10 Trixie Mattel Songs
Parker McCollum Spends Some Time With Willie Nelson’s Guitar, “Trigger”
PICS: Country Stars Find Pit Road During NASCAR Race in Nashville