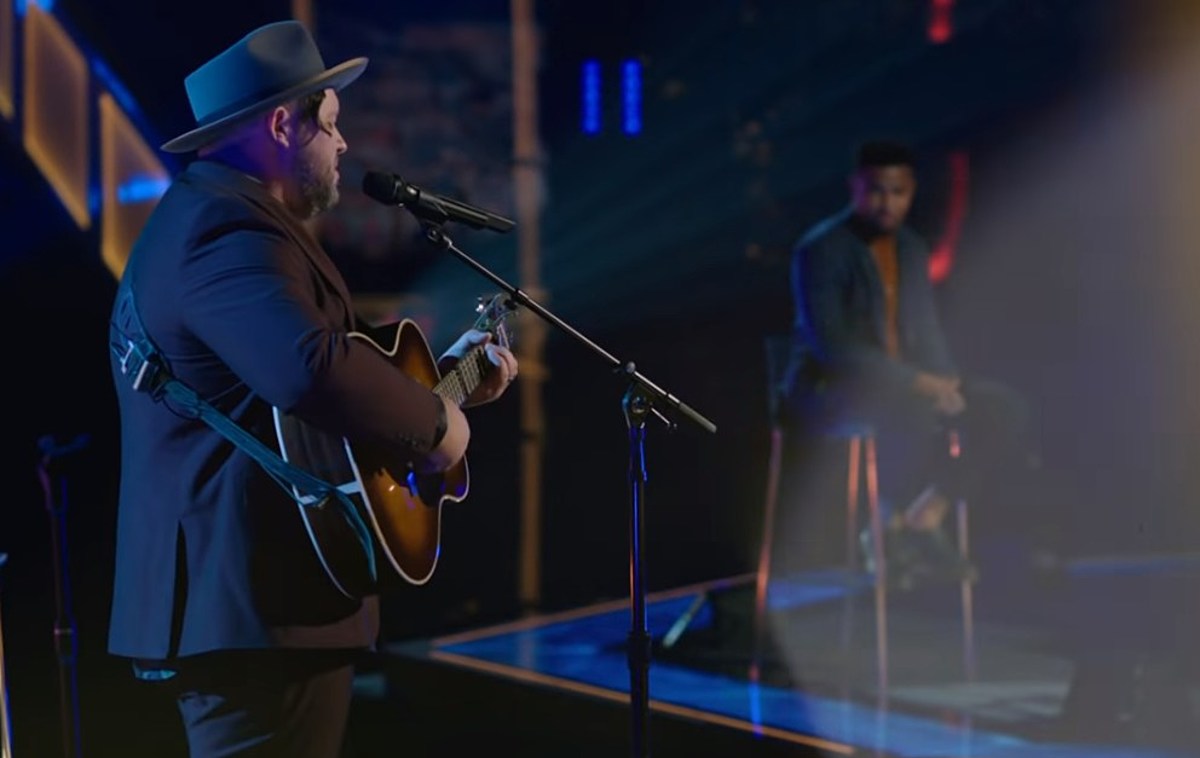 Monday night (Nov. 23)’s episode of The Voice featured more of the season’s Knockout Rounds, which find coaches Blake Shelton, Kelly Clarkson, John Legend, and Gwen Stefani pairing up their artists to square off against each other on songs of their own choosing.

This evening started off with Shelton’s Jim Ranger pitted against Jus Jon. Ranger decided to go a traditionally country route with Tim McGraw’s “Humble & Kind,” which he delivered with a lot of pomp, yet also a slightly somber and preachy feel. (Preacher’s son Legend, most tellingly, proclaimed the rendition “beautiful!”)

Interestingly, Jon went a totally different route to contrast with Ranger, choosing pop star Bruno Mars’ much more upbeat jam “Finesse,” and he danced and pranced about the stage convincingly. When he sang “Fellas, grab your lady if your lady’s fine,” Legend jokingly gestured to Shelton, whose fine lady Stefani sat just feet away.

“You perform with charisma and charm,” Legend told Jon. He had good words for Ranger, too: “Jim … Your voice has this well-worn, rugged quality to it.”

Stefani, admitting that she isn’t a dancer, admired Jon’s seamless mix of groovin’ and croonin’. “I love your vibe, I can’t believe you’re not signed,” she enthused. But she also said, “Jim … I just feel you could win the show. Blake, how do you compare the two?”

Clarkson made a comment about song selection, inquiring about Ranger’s choice of the McGraw song, which led Ranger to unexpectedly choke up on air, causing all the coaches to be visibly taken aback.

“I have two knucklehead boys,” Ranger said. “And they’re awesome.

“This is one of those songs that we sit around and listen to with my dad,” he added. “I want people to be nice humans.”

Shelton returned things to a more practical level, saying that Jon’s performance reminded him of when he “first got MTV,” stating that he was having a problem separating himself from being a coach versus being a fan. However, in the end, he went with Ranger, which was likely the more reasonable choice for his team.

The Voice airs every Monday and Tuesday on NBC beginning at 8PM ET.

Chris Janson Plots Heavy & Western Tour for 2023
Dolly Parton Says Her Rock Album Is Coming Next Year: “I’m Callin’ It ‘Rock Star,’ Just For Fun”
See the Trailer for Tanya Tucker’s A Nashville Country Christmas
Fans Petition for Kentucky Park to Be Renamed for Loretta Lynn
Jake Flint’s Wife Speaks Out After His Unexpected Death at 37