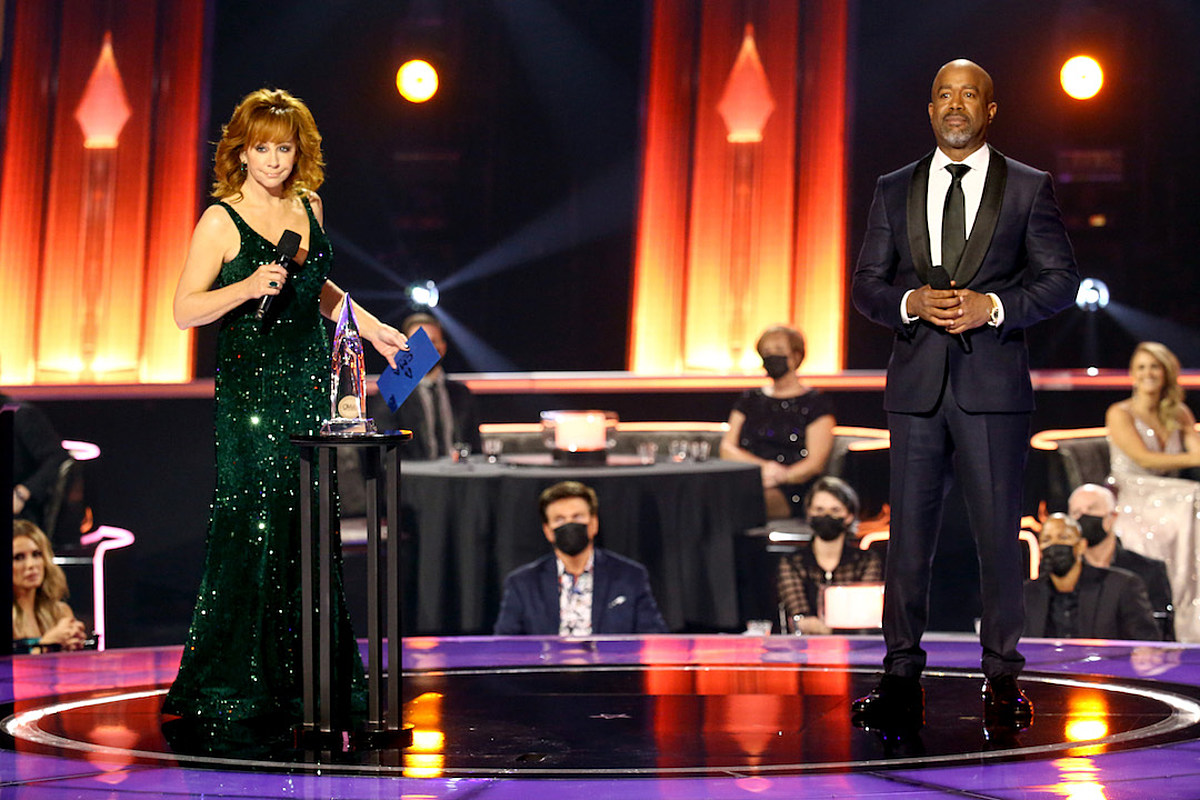 In some ways, Reba McEntire and Darius Rucker‘s co-hosting gig at the 2020 CMA Awards perfectly represented the show’s blend of old and new, of tradition and fresh blood. McEntire was a tried-and-true emcee, with four years of experience helming the CMAs before Wednesday night (Nov. 11), but it was Rucker’s first time in the role.

Rucker admitted before the ceremony that he was feeling a little nervous, but in the virtual press room backstage at event, he said he had so much fun onstage that he’d be happy to return next year — that is, if the CMA will have him.

“If they call me back next year, yeah!” the singer said with a giggle, before tipping his hat to his powerhouse co-host. “Reba made it so easy … This was one of the best experiences of my life. [I] really enjoyed it.”

“He did a great job,” McEntire added approvingly.

Having one veteran and one newbie co-host was fitting, because McEntire and Rucker agreed that one of the highlights of Wednesday night’s show was how it honored both country music’s legacy and its burgeoning future. For example, Rucker said that one of the personal highlights of being onstage this year was being in the same room as a few living legends.

“The highlight for me was seeing Charley [Pride] again, getting to talk to him and hug his neck, and seeing Johnny Lee,” the singer said. Pride received the 2020 Willie Nelson Lifetime Achievement Award in recognition of his pioneering country career, while Lee, along with Mickey Gilley, were in attendance as Old Dominion gave a tribute performance to mark the 40th anniversary of the movie Urban Cowboy.

“Seeing those guys and being a part of it was a highlight for me, because those guys all paved the way for us to be here,” Rucker went on to say. “And to see them in the audience and be friends with them, that was awesome for me.”

McEntire echoed that sentiment, but added that one of her favorite parts of the show was getting better acquainted with the up-and-comers of the genre. ”There were so many new artists — 23 new nominees this year,” she pointed out. “And a lot of them, I had never met.”

Watching winners’ names be announced at the 2020 CMA Awards, viewers could sense a “changing of the guard.” Industry member and Country Insider managing editor Brian Mansfield pointed out on Twitter during the show that six of the night’s 12 total trophies went to artists who’d never won in their category before, and Carly Pearce, Morgan Wallen and Lee Brice all won their first-ever CMA Awards.

“I thought it was a wonderful, well-rounded show. Great music, and there was a camaraderie in the audience tonight that was so much fun to watch,” McEntire went on to say backstage. “Everybody had a great time, and got to visit and mingle. With Johnny Lee and [Gilley] and [Pride] all there, and all the newcomers, it was a wonderful evening for country music.”

See Which Artists Earned the Most 2020 CMA Awards Nominations: