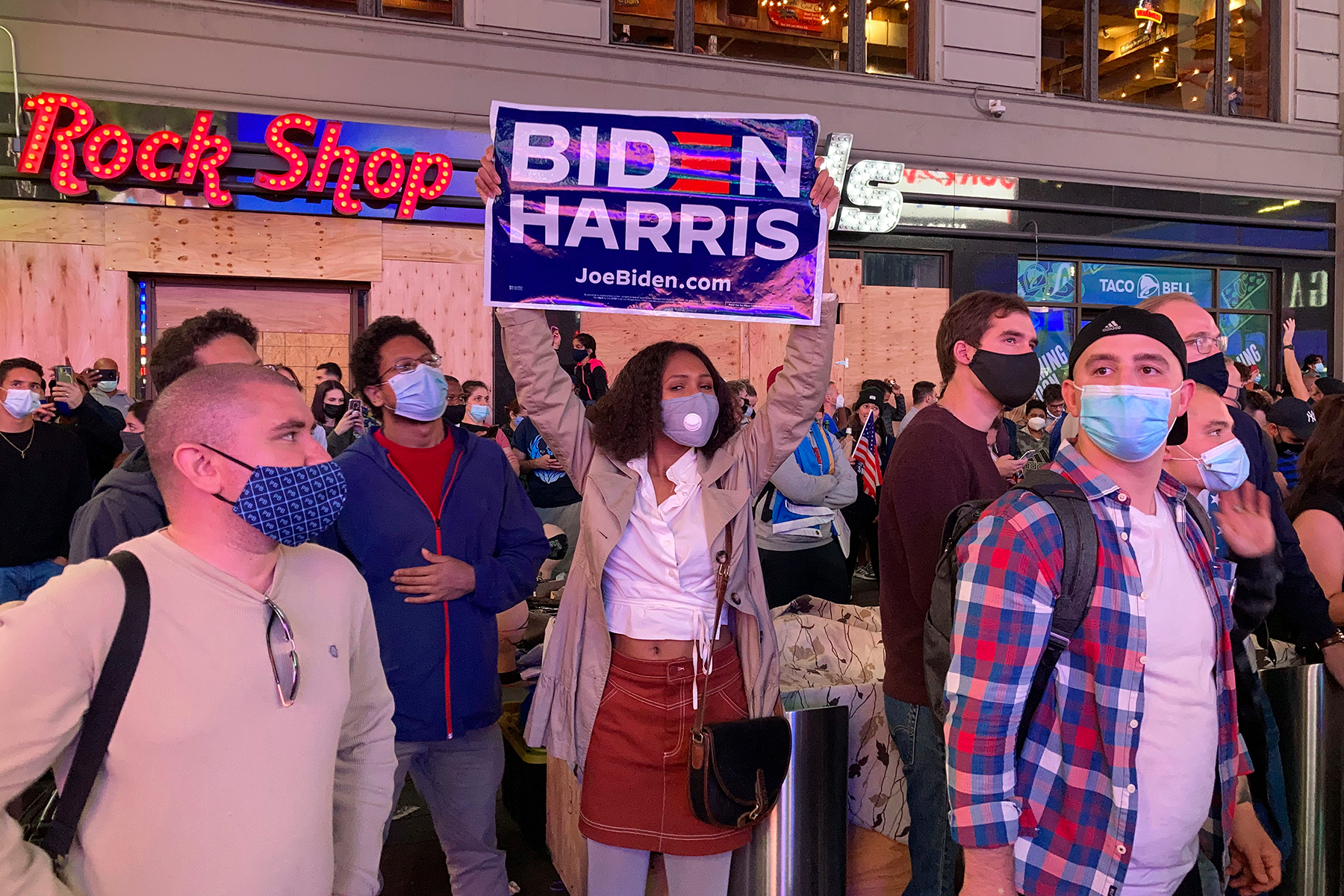 Today — barely nine months since the pandemic took off in earnest  — the United States has surpassed 10 million cases of the coronavirus. That’s according to Johns Hopkins University, a bastion of public health and medicine, not a media outlet that some may choose to dismiss as “fake.” More than 237,000 Americans have died since the first reported case of Covid-19 in January.

And yet, today, a number of country music artists — some who should more than know better — are spouting off about “hypocrisy.” As they see it, this weekend’s spontaneous celebrations in cities around the country following Joe Biden’s victory in the presidential election (an election George W. Bush described as “fundamentally fair”) are somehow equal with their right to begin playing concerts again.

“The hypocrisy is unreal,” Morgan Wallen wrote on Instagram, along with a photo of people crowded into the street opposite Lafayette Park in Washington, D.C. “If you don’t agree with me, fine. We can still be friends. But I have a family, band, and crew that need to be provided for and taken care of. If it’s OK for us to party in the streets with no ‘social distancing’ then we can book shows right now.”

Brianna Keilar Rips Trump and GOP Over Election Hypocrisy: ‘The Ex Who Just Won’t Accept That It’s Over’

30 Best Sports Movies of All Time

Wallen, as you might remember, was uninvited as the musical guest on Saturday Night Live last month after videos and photos appeared online of the singer kissing women and mugging for the camera at an Alabama party just days before his SNL debut. In a video apology, Wallen said he was going to take some time off and that “it may be a second before you hear from me.” It was barely that long. He resurfaced last week on the podcast of the radio personality Bobby Bones; this weekend, he was online lecturing about largely masked celebrations.

Brian Kelley, one half of Florida Georgia Line, suggested that Covid-19 may be somehow tied to the election itself. “Knew we were waiting on the election since March when this shit show started,” he commented over a photo of a D.C. celebration. Conspiracies seem to run in the Kelley household. Earlier this summer, his wife, the social-media influencer Brittney Kelley, amplified the Wayfair online-furniture conspiracy, an insane second cousin to Pizzagate and QAnon that warns of child trafficking. On Monday, she addressed her followers in an Instagram video, clarifying her take on the election dance parties. “We are for the rallies, we are for the celebrations, whoever wins, it’s fine,” she said, “but it felt like someone needed to call out the hypocrisy.”

“Time to go back to work AMERICA,” Brian Kelley continued in his post. “Booking shows ASAP.” Well, not as Florida Georgia Line he won’t be: On Monday, his bandmate in the duo, Tyler Hubbard, announced he’s quarantining after testing positive and will be missing FGL’s scheduled performance at Wednesday’s CMA Awards. (A Lincoln-had-a-secretary-named-Kennedy coincidence? Hubbard, a vocal proponent of gun reform, is from soon-to-be Blue Georgia; Kelly is from Red Florida.)

The country singers Chase Rice, RaeLynn, Michael Ray, Mitchell Tenpenny, and Chris Lane also weighed in with online comments equating spontaneous celebrations with organized concerts (“People are partying in the streets everywhere in this country yet we can’t have concerts,” Lane wrote over a photo of students unwisely rushing the field during a Saturday Notre Dame football game.) Unmasked gatherings don’t faze Rice and RaeLynn: the former held an unmasked (but admittedly outdoor) concert for fans in Tennessee in June, and RaeLynn posted video from a religious worship “protest” she attended alongside thousands in October in downtown Nashville.

Clearly, some artists don’t see the key differences in environment. A celebration that erupts in the wake of an emotionally exhausting election — or a protest that forms against racial injustice and police brutality — and spills into the streets, with nearly everyone wearing masks and in constant motion, is not the same as a seated or standing-room-only indoor show. While a recent German study claimed Covid transmission risk can be low at indoor concerts, good ventilation, strict hygiene rules, and a limited audience are essential.

On top of this, and perhaps most egregious, the nonchalant calls to restart live shows generally fail to consider or acknowledge the fans. We’ve all been thrown into economic crisis because of the pandemic — millions have lost jobs, with music crews especially hard hit — and yet artists clamoring to return to the road in a traditional manner (not like the socially distanced and limited-capacity concerts by Jason Isbell and Marcus King) suggests they’re not taking into account their fans’ finances or their very health and safety.

Given the recent diagnoses of two of their colleagues — Hubbard and the singer Lee Brice, who also had to bow out of the CMA Awards — and the Covid-related deaths of Joe Diffie and John Prine, such comments to resume live concerts seem both cavalier and extraordinary.

But perhaps they shouldn’t be. Maybe, just maybe, some of these artists are overcompensating for another failure they witnessed this past weekend.

When Donald Trump was on the campaign trail in the weeks leading up to Election Day, where was the outrage over his largely mask-devoid and elbows-to-assholes rallies? Herman Cain was diagnosed with Covid nine days after attending a Trump rally at the BOK Center in Tulsa, Oklahoma, and then died. Where were the Instagram stories — that most chickenshit method of saying something in a way that doesn’t hang around too long — when that happened?

So maybe they’re simply mourning the defeat of Trump, the wannabe Superman who, on a supercharged and super-expensive regimen of drugs, beat Covid but couldn’t beat Biden — even if John Rich is tweeting that, like Lazarus, Trump will soon rise from the dead.

In the end, we too want shows to come back. It’ll be a glorious day when we’re all shoulder-to-shoulder again, singing, swaying, and sloshing drinks over one another. Until then, it’s time to stop spewing bullshit.