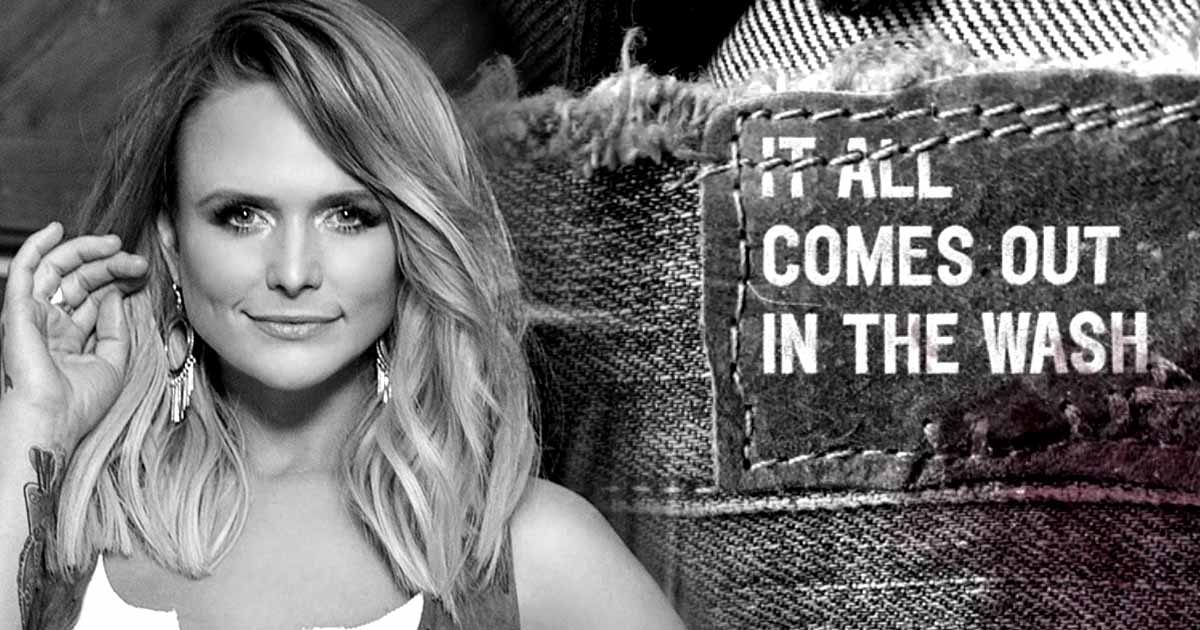 Nearly fifteen months of being on hiatus, Miranda Lambert released “It All Comes Out in the Wash” in July 2019 as the lead-off single of her seventh studio album Wildcard.

“I think that it’s got some sarcasm to it, but it’s very honest. I haven’t had a single out in a long time, and I’m just ready to have new music. I’m in a new phase of my life and ready to have new music out there that represents that,” Lambert said of the song at the time of release. “This one just felt perfect as far as the vibe of it. It’s fun and lighthearted, and I’m really excited about it.”

And the song gave the blonde beauty her best opening on the Billboard charts in three years. “It All Comes Out in the Wash” remarkably peaked at No. 14 on the Billboard Country Airplay chart and No. 12 on Billboard Hot Country Songs chart. By the end of the year, the uplifting little slice of sing-along honky-tonk country-pop earned Lambert a Best Country Song nomination during the 62nd Grammy Awards.

Written by Miranda Lambert with ace songwriting team The Love Junkies – composed of Hillary Lindsey, Lori McKenna, Liz Rose – “It All Comes Out in the Wash” is a song about “getting in some not-so-pretty situations and knowing it’s all going to come out OK,” said Lambert.

Lambert said she brought the song title, “It All Comes Out in the Wash,” into the room, and it was actually inspired by conversations they have all had with their moms at some point in their lives.

“When we were little, our moms would say ‘let’s not worry about a stain.’ Everyone goes through times in life that are difficult and has moments that they wish would pass,” she said. “This song is a mix of scenarios that we have all either been a part of or have seen, and is a fun reminder that hard times do eventually pass.”

Lambert and the trio “like to talk about girly things and things going on in life when we write together, so I feel like this song is just kind of a mix of scenarios that all of us have either been a part of, or seen, or you know, something that’s happened in all of our lives,” she added. “Realizing that when you have something in your life, that’s a little hurtful, or you know, a moment that you wish would pass, it does all pass. And it all comes out in the wash.”

True to her country roots, Lambert enjoyed a fun-filled day of off-roading and mudding with her friends for the music video of “It All Comes Out in the Wash.” Lambert found her truck stuck in the mud in this three-minute clip directed by Trey Fanjoy. She enlisted the help of two guys who assisted in pushing her out of the mud.

When she’s finally in the clear, one of the men falls onto one’s face in the mud, much to his disgust. Lambert, meanwhile, laughed along as she sang the infectious chorus. You can watch it below.

Charlie Daniels’ Lavish $200,000 Tour Bus For Sale — See Inside
Luke Combs Is Country Music’s Biggest Star. He’s Also Its Biggest Champion
PICS: Country Stars Find Pit Road During NASCAR Race in Nashville
Here Are Some Facts About Keith Whitley, Whose Impact On The Genre Remains Even To This Day
The Tie Between Kenny Chesney’s ‘Everyone She Knows’ + Tom Petty