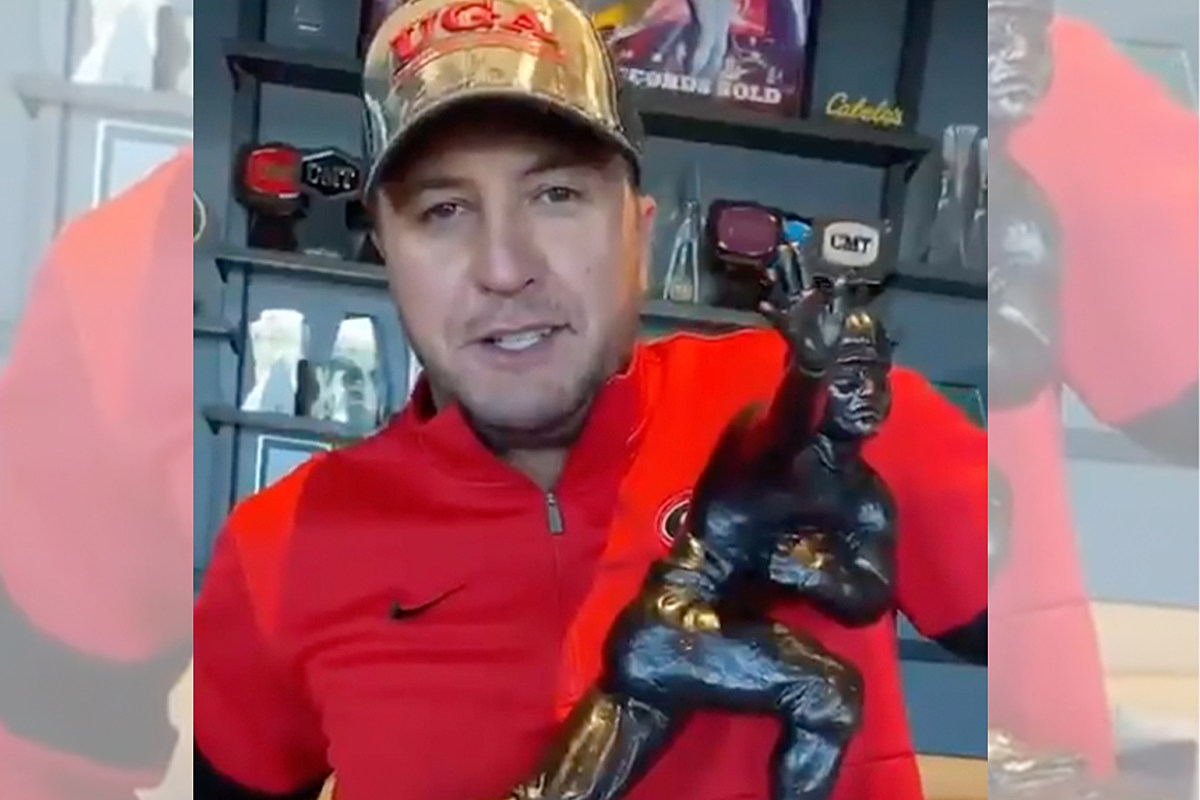 The country star revealed the location of the coveted trophy on his Instagram Wednesday (Nov. 4), letting his fans know how, exactly, it ended up at his house.

The Heisman Trophy is awarded each year to the most outstanding player in the NCAA football: the player who displays tremendous athletic ability, diligence, perseverance, hard work … He’s an overall well-rounded individual. Tebow clinched the title back in 2007, when he was the starting quarterback for the Florida Gators, becoming the first college sophomore to win the trophy. He went on to play for the Denver Broncos, New York Jets, New England Patriots and Philadelphia Eagles, and is now a broadcaster for ESPN.

But back to how the Heisman ended up in Bryan’s (very packed) trophy room:

“Last year at the Red Bird Games,” Bryan begins, “My wife — well, Tim Tebow showed up to the Red Bird Games and offered up his Heisman up for auction to donate to the Brett Boyer Foundation. And my wife bid and won Tim Tebow’s Heisman to be in our home.”

While the Red Bird Games and Caroline Bryan’s winning bid happened last year, the trophy has just now made its way to the Bryan household, where it will stay for six months — and for Bryan, the trophy could not have come at a better time: The country megastar is a diehard University of Georgia football fan. The school is also where his nephew, Til, attends college as a freshman, and on Saturday (Nov. 7), Georgia will play Tebow’s college alma mater, the University of Florida.

“He delivered it last week — the week before the Georgia/Florida game,” Bryan explains of when Tebow passed the Heisman to him. “I feel it was an effort to bring bad mojo into my household.”

So, in order to counteract any bad vibes, Bryan did the most practical thing: Wrapped the Heisman up in a Georgia hoodie!

Tebow likely regrets sending Bryan the trophy before the game. At the end of a video posted to social media, Bryan notes that he’ll be putting Tebow’s Heisman to good use, making sure all of the bad superstitions fall on Florida come game day.

“I’ve got this all week to put a curse on the Florida Gators,” Bryan says.

Luke, Caroline and their two sons Bo and Tate recently visited the University of Georgia campus, all decked out in the university’s spirit wear while checking up on Til:

While it seems like their nephew is enjoying his first year of college, both his aunt and uncle have had a hard time watching him leave the nest. Caroline posted a snapshot of her nephew back in August saying their goodbyes as he left for college, and added a sweet little note to the photo.

“I left a big piece of my heart today in Georgia. Been dreading this day for years, but I guess it’s time for Til to fly. Still can’t handle it right now! Good luck in college my sweet boy.”