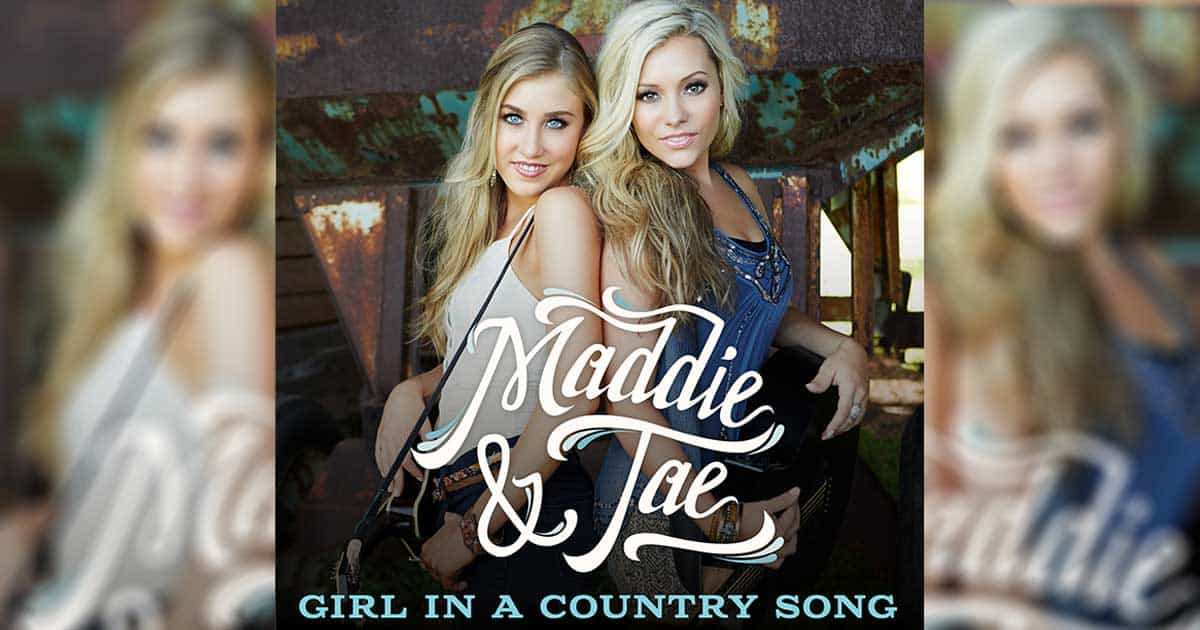 Maddie & Tae burst onto the country scene with the release of their debut single, “Girl in a Country Song,” in 2014.

The song quickly peaked at No. 1 on the Billboard Country Airplay chart; this made Maddie & Tae the first female duo who topped the chart with their debut single since 2006 and the only second in history.

It also charted at No. 3 and 54 on both the Hot Country Songs and Hot 100 charts, respectively. It achieved the same chart success in Canada, peaking at No. 5 on the Canada Country chart and No. 61 on the Canadian Hot 100 chart.

Written by Maddie & Tae with Aaron Scherz, “Girl in a Country Song” is an anti-Bro-Country. The song poked fun at the current trend amongst hitmakers like Blake Shelton, Billy Currington, Jason Aldean, and Luke Bryan – specifically about the way most top male stars portray women in their songs. And how “Conway Twitty and George Strait never did it this way back in the old days.”

“Girl in a country song. How in the world did it go so wrong. Like all I’m good for is lookin’ good for. You and your friends on the weekend, nothin’ more. We used to get a little respect. Now we’re lucky if we even get,” the song goes.

The song’s beginning goes way back to St. Patrick’s Day in 2014 when Maddie Marlow and Tae Dye sat down with songwriter Aaron Scherz. While talking about different country songs, they started to notice that the lyrics share a common theme. They never had any idea they would be creating history, giving a voice to females within the country genre.

“We wanted to go at it from a girl’s perspective, and we wanted to put ourselves in the shoes of this girl. You know, how does she feel wearing these cut-off shorts, sitting on the tailgate?” Dye said.

“We were in the songwriting room, and we had a checklist. Literally, we had a checklist. The first one read, I think, ‘girl.’ The second one was ‘tailgate.’ We went through all the songs that we love and made a checklist, and that’s how it happened,” the duo said of how they ended up incorporating all these references.

The song quickly resonated with listeners, most of whom have grown frustrated with the way women were sung about in country music’s current party stage – but it hasn’t been without controversy.

In an interview, Florida Georgia Line singer Brian Kelley seemed less than entertained when asked about the song.

“I’m not really familiar with that … All I’m gonna say about that is, I don’t know one girl who doesn’t want to be a girl in a country song,” he said. “That’s all I’m gonna say to you. That’s it.”

A year later, after their first single was released, Maddie & Tae did not regret their introduction to Nashville ruffled feathers. “I think the pushback almost motivated us a little more,” Dye admitted. “The fact that we knew we were doing something that people kind of got their feelings hurt over was worth something.”

The video for “Girl in a Country Song” even more created a buzz. Featuring a comical role reversal, scantily-clad country boys played the submissive roles usually reserved for women in country music videos. You can check it out below.