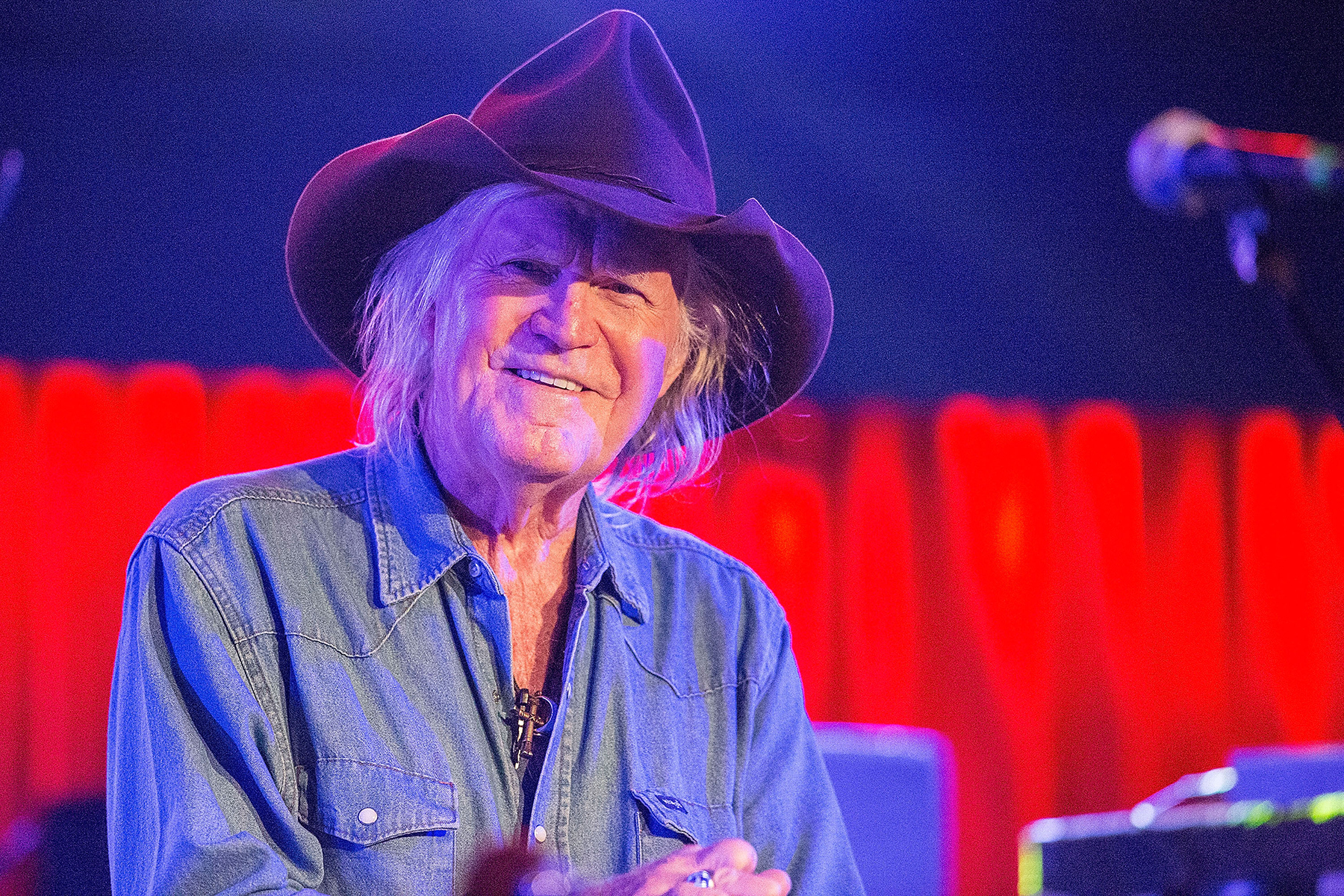 Billy Joe Shaver, who died Wednesday at 81, wrote country songs about what he knew firsthand: sin and heartbreak, hard living and hard working, and ultimately salvation. Waylon Jennings famously cut a bunch of them for 1973’s Honky Tonk Heroes, and Willie Nelson, Kris Kristofferson, and Johnny Cash would all record some too. Even Elvis Presley got in on the action. Here’s 10 Shaver classics that illustrate why Nelson once called him “the greatest living songwriter.”

Billy Joe Shaver never would forget the moment he memorialized his salvation into song. “I was out on a cliff at the narrows of the Harpeth River, close to Kingston Springs, [Tennessee],” he said in 2008. “I was about to die…But as I was coming down from that mountain at about four in the morning, I sang the first half of that song and got it into my heart…” The song in question was “I’m Just an Old Chunk of Coal,” a moving meditation of mid-life self-improvement that became a hit in 1981 for the country singer John Anderson. J.B.

“You Asked Me To”

Everyone from Waylon to Jamey Johnson to Nanci Griffith would sing this honky-tonk ballad, but there were few cuts Shaver was more proud of than Elvis Presley’s theatrical 1973 rendition of this tearjerker. “I wanted to take every song and make it about something different. I kind of learned that in a way from Elvis Presley,” Shaver told Rolling Stone in 2014. In later years, however, Shaver expressed regret at having let Jennings share his name on the publishing: “I still don’t think I’ve ever seen a dime on it,” he said. J.B.

“Ain’t No God in Mexico”

Originally recorded for Waylon Jennings’ 1973 opus Honky Tonk Heroes, “Ain’t No God in Mexico” was also cut by Shaver for his 1976 album When I Get My Wings. In Shaver’s telling, it’s the one that swayed Jennings to record a bunch of his songs. “He said, ‘You play me one song, and if I don’t like that song you’re going to get your ass up and get out of here and I ain’t going to see you again,’” Shaver told the Washington Post in 2018. “So I went and did ‘Ain’t No God in Mexico.’ He said, ‘Okay.’” It’s no wonder Jennings liked it — the song positively brims with outlaw swagger in its depiction of a man searching for his salvation and digging himself in a deeper hole with each new step. J.F.

“Willy the Wandering Gypsy and Me”

When Shaver played “Willy the Wandering Gypsy and Me” after the Dripping Springs Reunion in 1972, Waylon Jennings took notice and extended an invitation to come write songs for him in Nashville. Based on the itinerant life of fellow Texas songwriter Willie Nelson, it perfectly illustrates those combined feelings of rootlessness and freedom familiar to both touring musicians and range-riding cowboys. “Well I reckon we’re gonna ramble ‘til hell freezes over,” Shaver sings, and he was pretty much right about that. J.F.

In 1993, Shaver took stock of his impact in the song “Live Forever,” which he cowrote with his son Eddy. The tune first appeared on Shaver’s Tramp on Your Street album, which featured Billy Joe and Eddy together. “Just like the songs I leave behind me, I’m gonna live forever now,” the Shavers sing in harmony over acoustic guitar and a thumping rhythm. They later recut the tune for their Victory album, and Billy Joe sang it alone. The age in his voice gives this rendition more depth and poignancy than the first take. “[Eddy] actually gave me that melody, and I carried it around for nearly a year,” Shaver once said of his son, who died in 2000. “His spirit’s still with me. I do believe that when people pass away, the goodness, the good things they did, it seems like they melt into your likeness … and you become a better person for it.” K.G.

Waylon Jennings caught a Shaver concert in 1972, a year before Shaver’s debut LP came out, and the pair hit it off, so Shaver penned a song for Jennings to sing about “lovable losers and no-account boozers, and honky-tonk heroes like me.” Shaver pursued Jennings all over Nashville for six months with that tune and several others, until he cornered the outlaw hero. “He tried to give me $100 bucks to go away and I told him, ‘You’re going to listen to my songs or I’m gonna kick your ass here in front of God and everybody,’” Shaver recalled in a Variety interview. “After I played him a bunch of my songs, he called in his band and we got to work.” Jennings put out the Honky Tonk Heroes LP in ’73 with nine Shaver-penned tunes, kicking things off with the wry title track. K.G.

With its bouncy internal rhyme scheme meter, the title track to Shaver’s 1973 debut introduced the singer as a Texas country poet on par with that album’s producer, Kris Kristofferson. “Fenced yards ain’t hole cards and like as not never will be,” sang Shaver over a rollicking barroom piano. Despite never becoming a hit, the song would become one of Shaver’s most enduring standards, performed by everyone from Bob Dylan and Willie Nelson to Tom T. Hall, Emmylou Harris and Jerry Jeff Walker. Shaver was barely 35 when he first released the tune, but as the songwriter and his contemporaries aged into the song’s later-in-life nostalgia, it would only become more potent. J.B.

“Ride Me Down Easy”

Another great song Billy Joe Shaver penned for Waylon Jennings after they crossed paths in the early Seventies, “Ride Me Down Easy” is an outlaw’s repentance. Jennings sings about leaving his hell-raising days, yesterday’s wine, and some satisfied women in the past as he prepares himself for the final leap, or maybe he just wants to turn over a new leaf. “Ride me down easy, Lord … leave word in the dust where I lay,” Jennings sings over mournful acoustic guitar, “Say I’m easy come, easy go, and easy to love when I stay.” It became one of Shaver’s most enduring tunes. Bobby Bare covered it the same year it came out, in 1973, with a more upbeat arrangement, and just missed the Top 10 with it, and Shaver covered it himself in 1982 on his Billy Joe Shaver LP, sounding more down-on-his-luck than Jennings. By then, Shaver had lived enough to mean it. K.G.

“The devil made me do it the first time, the second time I did it on my own,” Shaver growls in one of many killer lines in “Black Rose,” recorded for Old Five and Dimers Like Me the same year Jennings cut it for Honky Tonk Heroes. Set to a funky, upbeat rhythm, the tune describes the magnetic pull of a woman “with the tools you need,” which according to Shaver was inspired by a formative sexual experience with a prostitute. J.F.

“I Been to Georgia on a Fast Train”

On his first big hit, Billy Joe Shaver was in a reflective, sunny mood. The artist’s 1973 single “I Been to Georgia on a Fast Train” was something like an autobiography as he recalled over a galloping rhythm how his mother split when he was born (in reality it was his father who hightailed it) and he fell in love with country music while picking cotton. For all of the hardship he detailed, he somehow sounded upbeat. Waylon Jennings and Emmylou Harris liked it so much, they covered it, and Willie Nelson made it a staple of his live shows in tribute to Shaver. K.G.

Wheeler Walker Jr. Tries To Give Walker Hayes’ “Y’all Life” A Shot, & His Reaction Is Priceless
Ranking All 29 of Tim McGraw’s No. 1 Songs
‘The Voice’ Reveals Top 10 for Season 22
Dreamy and Golden Vibes: “Here Comes My Baby” by Dottie West
Caroline Kid Shares Sunny Music Video for ‘Do I Miss the Rain’