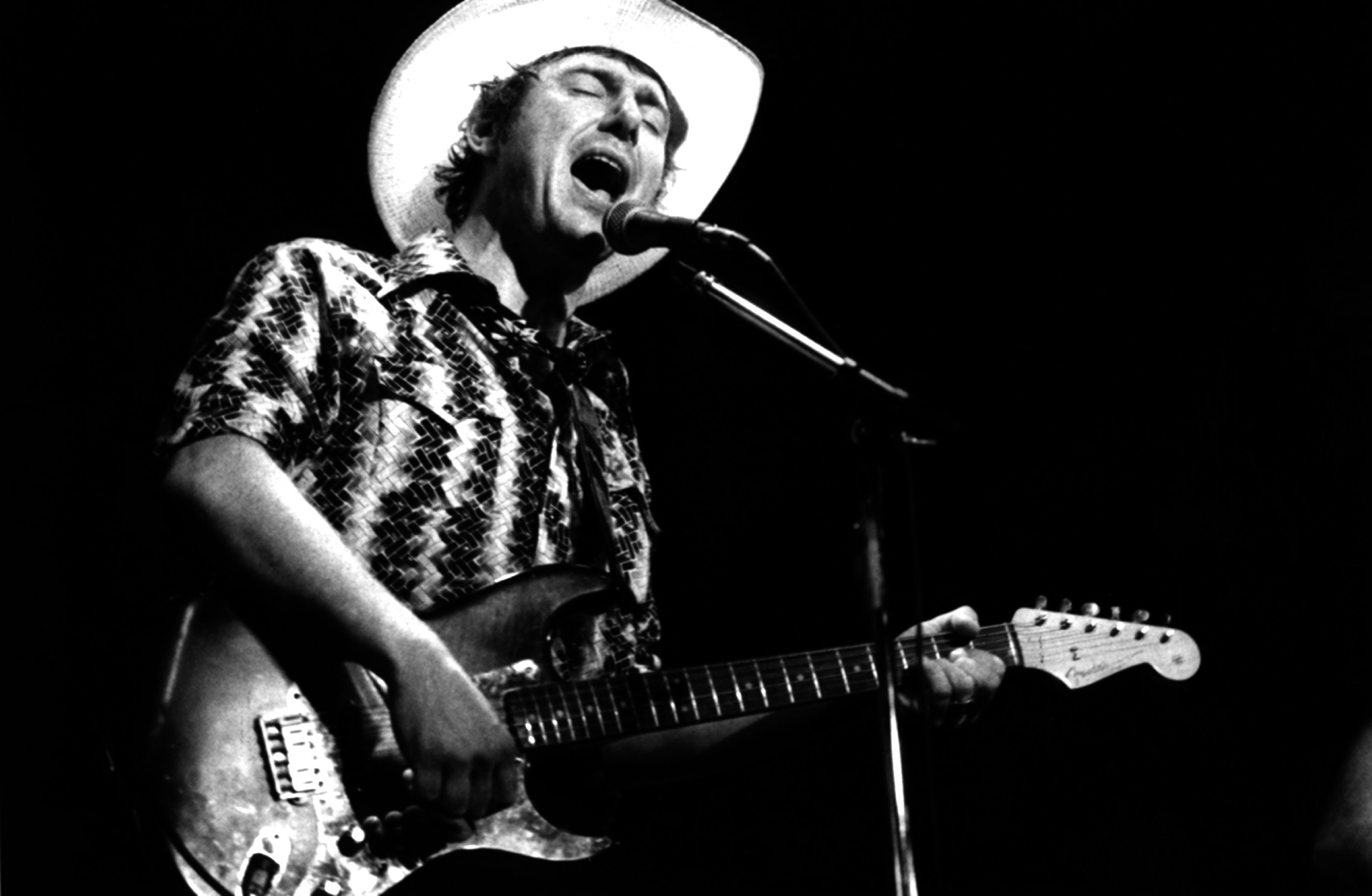 Jerry Jeff Walker has never been one to do what he was supposed to do. A military dropout who scored a Top 10 hit in writing “Mr. Bojangles,” he left New York City for Austin, Texas, long before it was known as the “Live Music Capitol of the World.” And in the summer of 1973, Walker cut an LP, ¡Viva Terlingua!, that helped lay the foundation for the outlaw country sub-genre of country music.

“We had an independent record and we used it to the nth degree. It wasn’t this independent deal where you find a producer, go up to Nashville and record in a studio. We actually applied it to being here, made in Texas for Texas,” says Walker, now 76. “It’s still the quintessential Texas album as far as explaining how it all was before Austin City Limits.”

¡Viva Terlingua! would be a literal soundtrack to Austin’s golden age, with one of its best-known cuts, “London Homesick Blues,” serving as Austin City Limits‘ theme song for nearly 30 years. But the nine-track album, released over 45 years ago, had a greater influence as the high-water mark for the Texas strain of cosmic cowboy music, as well as the template for the modern-day ecosystem of Red Dirt and Texas Country.

“It set a fine example for singer-songwriters and everything that followed. It was more Texas than, say, Willie [Nelson], who was a Nashville product. He had the whole Nashville record company sheen behind him,” says Gary P. Nunn, the author of “London Homesick Blues” and then a member of Walker’s Lost Gonzo Band, which played with him on the album. “It made a statement and created an image of what Texas [music] was and could be.”

Walker first lived in Austin for a brief time in the mid-Sixties, but after Nitty Gritty Dirt Band’s version of “Mr. Bojangles” went to Number Nine on the Billboard Hot 100 in 1971 he set his sights on the West Coast. Along the way, he made a detour through Texas — and never left. Drawn in by a burgeoning singer-songwriter scene that included Steve Fromholz, Rusty Weir, and Townes Van Zandt, he soon recruited Michael Martin Murphey’s backing band to play with him.

“The people in Texas, if they heard a new song, they were so excited and eager to play on it. They just wanted to try things,” says Walker, whose voice has worn into a hoarse and painful-sounding rasp. His seat-of-the-pants approach never fit well with his first label, Atlantic Records. “The studios in New York, they don’t want to sit through that. They’re on a time schedule. You got to have all that shit worked out in advance.”

In the Lost Gonzo Band — a name cribbed from his friend Hunter S. Thompson and a perfect encapsulation of the group’s countercultural ethos — Walker found his vehicle for an eclectic mix of country, folk, rock, Tex-Mex and Tejano, all of which were native to Texas but rarely used together in Music City or the Big Apple. “Somebody told me ‘gonzo’ meant taking an unknown thing to an unknown place for a known purpose. I always thought, ‘Yeah, we don’t know where the fuck we’re going, but when we get out there and do it, we’ll know it,’” he says.

Newly signed to MCA, Walker cut part of his self-titled album in Austin in 1972 with the Lost Gonzo Band, but still wasn’t happy with the results. While in New York to finish the record, he came across a mobile recording studio run by Dale Ashby. “I beat on the door and said, ‘What are you guys doing?’ They said, ‘Well, we built this mobile truck so we could go someplace instead of being in a studio,’” Walker recalls. “I said, ‘How would you like go to Texas?’ And they said, ‘Give us a road map and when we finish this one, we’ll head there.’”

Walker’s location of choice was Luckenbach, a small hamlet in the Texas Hill Country. Little more than an old post office and a general store with a dance hall, Luckenbach was founded by Hondo Crouch, a former all-American swimmer and all-around eccentric whose wife owned an antique shop in nearby Fredricksburg. “Hondo was like the pied piper cowboy. He had a childlike way of looking at things,” says Nunn, who remembers Crouch leading people on scavenger hunts for arrowheads in the woods. “He could break into some traditional Mexican song and sing it in Spanish at the top of his lungs. He was just this magical character. Everything he did was enchanting, humorous and playful.”

If label executives were wary of the idea, a fact that Walker parodied on opening track “Gettin’ By,” his band simply braced themselves for the latest whim of their leader, who was notorious for showing up drunk to his shows — and for getting into, and often losing, fights. One oft-repeated episode at the Castle Creek in Austin saw Walker show up in a bathing suit, vest, cowboy hat and boots after “drinking Brandy Alexanders all day long,” according to Nunn.

There was no such drama with the Luckenbach sessions, which stretched out over four to five days in August 1973. With a limited power supply, there was no air conditioning in the dance hall, but Nunn admits he barely remembers the sweltering conditions of a high Texas summer. “Back then, gosh, those dance halls were all hot. It was just part of the deal, you took that for granted. After working in the hay fields [growing up], playing in a bar was fun by comparison, even though you were sweating up a storm,” he says.

At week’s end, Walker decided to host a concert at the dance hall with the aim of adding some live recordings into the mix. “I put the word out in Austin, called the radio stations and said, ‘Put it on the radio: If you come down, you’ll get in for a buck,’” he says. With albums rarely recorded in Austin at the time, much less live ones, the turnout greatly exceeded expectations: “I wasn’t sure how many people would show up. 50 people would’ve been plenty. 900 people showed up.”

The two songs that made it onto the album from the Saturday night concert helped seal the legend of ¡Viva Terlingua!: “London Homesick Blues” and Ray Wylie Hubbard’s “Up Against the Wall Redneck Mother.” The former was a composite recording, as the band played it twice after Walker broke a string, with the first version’s encore tacked onto the end of the second. Nunn handled the singing himself. “You help your band members get a break if you can, because they help you make it. You’d go to Waylon [Jennings’] shows and his bass player would sing two songs before he came out — all that stuff,” says Walker.

“Up Against the Wall Redneck Mother”

“Up Against the Wall Redneck Mother” wasn’t even finished when the band decided to record it, so bassist Bob Livingston called Hubbard to write an extra verse. “I just wrote the second verse there over phone. I said, ‘He sure likes to drink,’ and I think I was drinking Falstaff Beer, so I said that. [And] that was it. I pretty much hadn’t even thought about it,” says Hubbard. Livingston himself ad-libbed the spelling of “Mother” during the song’s bridge.

With Ashby’s equipment rented out for an extra day after the concert, Walker played the band another new song, “Wheel,” which was inspired by the scene of the tractor accident that killed his grandfather when Walker was 15 years old. “I looked up and Herb [Steiner], the pedal steel player, was crying and said, ‘That’s the most beautiful thing I ever heard in my life.’ I went, ‘Christ, I guess I better record this thing,’” Walker says. “So we listen to the playback and the guys said, ‘Great! We didn’t think we were going play today, so we all took mescaline.’ That’s why they were all so emotional. I don’t know if I really touched ’em or not.”

¡Viva Terlingua!, released that November, did strike a chord with fans, especially ones in Texas. The album quickly sold 50,000 copies in the Lone Star State, but only another 20,000 in the rest of the country, which ensured its legacy as a homegrown cult classic. (The wooden door featured on the album’s cover is now on display at the Country Music Hall of Fame and Museum.) Though Willie Nelson had already relocated to Austin and hosted his first Fourth of July Picnic, drawing national coverage by writers like Chet Flippo at Rolling Stone, ¡Viva Terlingua! epitomized the cosmic cowboy era before it came to be known as outlaw country.

“‘Outlaw country’ made it sound like you had to go to jail to be an artist, but it’s just that some people like Waylon and Willie were outside the business [norm],” says Walker. “People said, ‘We’re different, but we’re not hillbilly country.’ We didn’t blacken our teeth and wear baggy pants, we just liked cowboys and played like that. That was still the mold that had to be broken.”

While Nunn carved out a solo career in part due to the exposure gained from “London Homesick Blues,” other Texas artists like Hubbard found their own niche in the lane that ¡Viva Terlingua!‘s success opened up for them. “It was kind of a blessing and a curse because I hadn’t done anything else,” says Hubbard, of the inclusion of his song on the album. “It was weird to be known for this novelty song because I’d been a folk singer and found myself playing in honky-tonks. But now it fits in the arsenal real well.”

In the four and a half decades since the release of ¡Viva Terlingua!, Texas Country has become its own self-contained industry, with singer-songwriters like Robert Earl Keen, Jack Ingram and Pat Green all following unmistakably in Walker’s footsteps. But, as Hubbard insists, the music just plain holds up. “In my opinion, that’s the definitive progressive country album ever made. [Walker] was doing the cowboy hat, boots and cocaine before anybody. He was a pioneer,” he says with a laugh. “I keep telling him, ‘I never thought I’d live long enough to see you live this long.’”

Walker’s health has become a serious concern in the past 18 months, as he was diagnosed with throat cancer in May 2017 — and though it was initially thought the cancer had been removed, it was recently found to have returned. He was scheduled to go in for a further surgery on December 6th, and his damaged vocal chords have left him unable to sing. But even with the pain of speaking, he goes on for nearly an hour reminiscing.

“That feeling can come from any situation you get into where you transcend the process,” Walker says, summing up what made ¡Viva Terlingua! such a special experience. “We done it our way, with our own band. [And] I think, because we did that and that worked, it gave people a lot of strength to go and produce stuff they’d thought about doing — like, ‘He’s taking chances, he did OK, we can probably all do that, too.’”

[Editor’s Note: a version of this story was originally published December 2018]